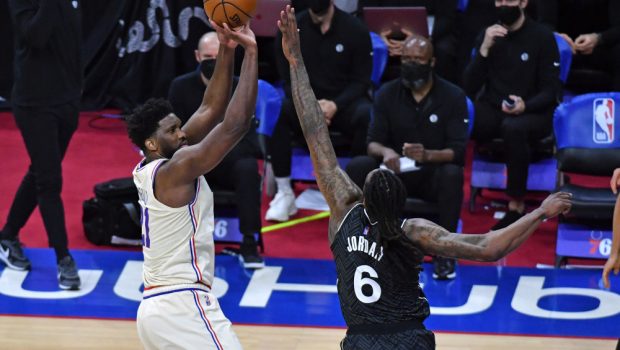 STEPHEN A: SIXERS IN 7 OVER HAWKS, ‘THEY AIN’T BEATING NETS’!

Stephen A. Smith worked in Philly at the Inky and is now an ESPN star.

And he appeared on the latest episode of Takeoff with John Clark:

Though Smith believes the Sixers can defeat the Hawks, he thinks they have no chance against Brooklyn.

“The ride ends there,” he said. “They ain’t beating the Brooklyn Nets. I can assure you of that.”

“I have the Sixers in seven, but I say that with some degree of trepidation,” Smith said.

“The Sixers are going to have to reclaim home-court advantage in Game 3 or 4. They can’t come back to Philadelphia down 3-1. They won’t beat Atlanta three straight. If they lose both of these games, they lose the series, just like if they’d lost last night and gone down 0-2, they would’ve lost this series. But they showed up. (Joel) Embiid was big time. … Big-time performance by Shake Milton in that second half. That’s what they’re going to need as this series progresses, because Atlanta is going to make some of those shots that they missed.

“Embiid, he might get 40 every night, but you can’t rely on Shake Milton to do that every night. And you can’t expect Ben Simmons to spend so much time defending Trae Young, because Trae Young might figure out how to get him in foul trouble the way he figures out how to get everybody else in foul trouble. So all of those things you take into consideration, and you reach the conclusion that the Sixers should win this series, but Atlanta is a team to be reckoned with because they have better shooters and they have a better bench thus far. We’ll see what happens.”