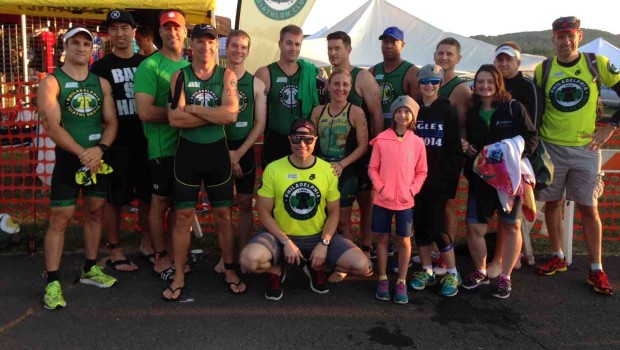 Several of the participants are in green, along with some volunteers.

The Phillies’ season is effectively deader than the Soviet Union and the Eagles are in their second training camp at the NovaCare Center in South Philly.

So, what could possibly fill the August sports void for athletes and volunteers of upper Bucks County, near where the Birds once trained at Lehigh?

How about the 4th annual Steelman Triathlon?

On Sunday morning, approximately 1,000 ultra-athletes — supported by hundreds of volunteers — took to the course in Quakertown’s Nockamixon State Park to participate in the Steelman Triathlon, which offered the athletes a variety of race configurations:

The Sprint event involving a 800-yard swim, a 12.8 mile bike ride and finishing with a 3.1 mile run. The Olympic event is double that distance. Athletes could also choose Aqua-Bike, or to compete as part of a relay team.

The Elite Female Olympic Triathlon first place went to Nancy Smith of New Britain who finished the course in two hours, 20 minutes. She completed the swim in 22:16, the bike in 1:11:24 and the run in 43:07.

The Steelman benefits Make-A-Wish Foundation of Philadelphia and Susquehanna Valley and is championed by the Pennsylvania Department of Conservation and Natural Resources.