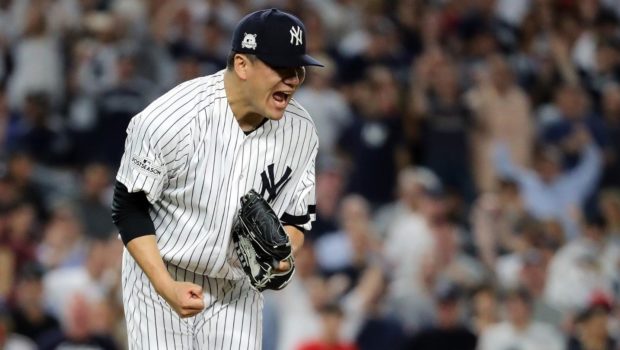 Masahiro Tanaka delivered the win and Greg Bird cracked a home run off Andrew Miller, extending the Yankees’ hopes for another day with a 1-0 victory over the Indians in yesterday’s game 3 of the American League Division Series.

Bird’s second homer of the series, a towering drive into the second deck in right field, provided some desperately needed support behind Tanaka’s dominant outing. With the Indians flailing regularly at his lethal splitter, Tanaka blanked Cleveland’s formidable offense on three hits through seven frames, issuing one walk with seven strikeouts over a 92-pitch effort.

New York trails the best-of-five series, 2-1, with Game 4 set to be played at Yankee Stadium tonight at 7 p.m. ET. It marked the Yankees’ first 1-0 postseason victory since Game 3 of the 2001 ALDS against the Athletics, a series in which the Yanks rallied from an 0-2 deficit.

“Plain and simple, I’m not ready to be done playing and I don’t think the rest of the team is,” Bird said. “I’m just very happy with that and knowing it gives us a chance, really. It was an incredible experience, an incredible game, and we’re not done.”

Offering the Yankees their longest start of the postseason, Tanaka had some help from his defense. Aaron Judge needed every inch of his 6-foot-7 frame to corral a deepFrancisco Lindor drive in the sixth inning, taking a two-run homer away from the Tribe shortstop and drawing chants of “M-V-P!” from the crowd of 48,614.

“A great catch, ends up saving the game,” Yanks manager Joe Girardi said. “I’ve said all along about Aaron Judge, he’s a complete player. It’s not just a home run hitter. It’s a guy that runs the bases, that plays very good defense, and that drives in a ton of runs and is extremely productive as a hitter.”