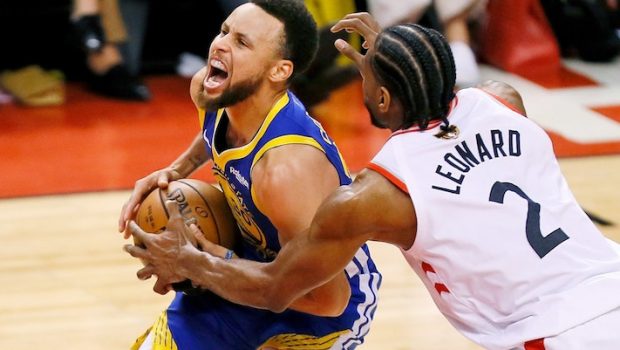 It was just another night of stunning surprises in the NBA Finals:

The defending champion Golden State Warriors eked out a game 5 win at Toronto.

And in the process they lost their their star Kevin Durant for the rest of this series and perhaps beyond.

Durant lasted only 12 minutes in his comeback before suffering what would be revealed later as an Achilles’ injury, but the Warriors pulled themselves together after his emotional departure and dug out a 106-105 victory over the Toronto Raptors to fend off elimination in Game 5. The Golden State win narrowed Toronto’s series lead to three games to two and prevented the Raptors, in front of an expectant sellout crowd, from clinching the first championship in the franchise’s 24-year history.

Yet the Warriors, given the severity of Durant’s injury, could scarcely celebrate. An MRI is scheduled for today, but fears of a full rupture had Bob Myers, Golden State’s president of basketball operations, fighting back tears as he updated Durant’s status at the postgame news conference.

“I don’t believe there’s anybody to blame, but I understand in this world, and if you have to, you can blame me,” Myers said. Durant had been sidelined since straining his right calf May 8 in Golden State’s second-round series with the Houston Rockets.

Said Warriors Coach Steve Kerr: “I just told the team I don’t know what to say, because on the one hand I’m so proud of them, just the amazing heart and grit that they showed, and on the other hand I’m just devastated for Kevin. So it’s a bizarre feeling that we all have right now — an incredible win and a horrible loss at the same time.”

Kawhi Leonard scored 10 of his 26 points in a stunning fourth-quarter flurry that erased the last of Golden State’s 14-point lead and appeared to put the Raptors on the verge of the title. But late 3-pointers from Stephen Curry and Klay Thompson, combined with a crucial defensive stop on Toronto’s final possession — when Draymond Green blocked Kyle Lowry’s corner 3-point attempt — enabled Golden State to escape with an improbable victory.

The Warriors survived by making 20 3-pointers as a team — the second most in an N.B.A. finals game, behind the 24 that the Cleveland Cavaliers sank against Golden State in Game 4 two years ago. Curry had a game-high 31 points, Thompson added 26, and Green (10 points, 10 rebounds and 8 assists) flirted with a triple-double. In addition, DeMarcus Cousins — who didn’t play last night until Durant went down — helped fill the void with a much-needed 14 points and six rebounds.

Yet there was grave concern about Durant’s injury from the moment it happened. He left the arena on crutches in the third quarter with his right foot in a walking boot — a stunning scene given that Durant is expected to hit the marketplace in three weeks as one of the most coveted free agents in league history.