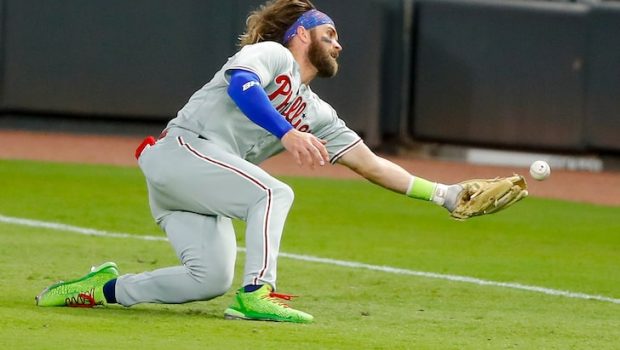 So, these are desperate times that call for desperate measures.

Bruce is on the 10-day IL with a left quadriceps strain, and Quinn is on the seven-day concussion IL. The only true outfielders remaining on the 28-man roster are Bryce Harper, Haseley, Garlick and Andrew McCutchen. Phil Gosselin and Neil Walker can play outfield, but they are true infielders.

Harper started in center yesterday for the first time since 2018 because the Phillies are short on outfielders and not ready to play Adam Haseley every day against left-handed pitching.

The Mets started left-hander David Peterson in a 9-8 Phillies win in 10 innings at Citi Field. Peterson lasted only two innings on the mound. Harper lasted only five in center, returning to right after Kyle Garlick misplayed a ball in the fifth, allowing a run to score. Haseley replaced Garlick and played center.

“Adam is probably the player that shows his hand the least of any player that we have, whether he’s excited or disappointed,” manager Joe Girardi said. “It was just something we did. I talked to him today. I said, ‘Look, I’m going to flip it fairly quickly if we get a lead, and I’m going to put you in center.’ So he understands that. There’s going to be plenty of playing time for him.”

Girardi told Harper on Sunday that he planned to start him in center. It was a short-term thing, which is good news for Harper, who prefers right field.

Harper played 63 games in center field with the Nationals in 2018, and 184 games in his career overall. But he thought the position took a toll on him in the long-term.