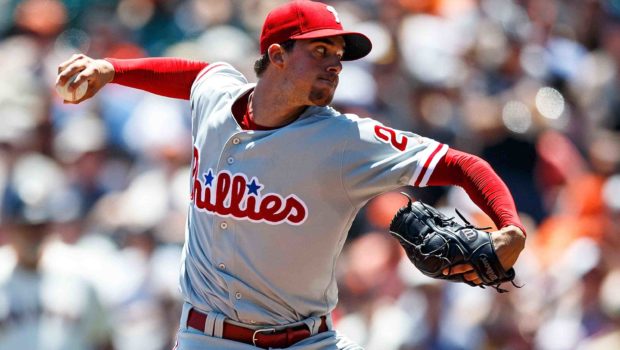 STARTER AARON NOLA’S DOLDRUMS ARE A REFLECTION OF PHILLIES’

Aaron Nola started 2016 like a firecracker Phillies starter, but in the past month and a half he has been a decided dud.

Nola’s posted a 3.12 ERA through his first 25 starts in the big leagues, using pinpoint command to elevate his status in the Phillies’ rotation. But he has misfired wildly in his last four starts, including yesterday’s 8-7 loss to the Giants at AT&T Park, going 0-3 with a 15.23 ERA.

“He’s a little confused right now,” Phillies manager Pete Mackanin said. “He’s approaching his first full year in the big leagues, so he’s going to have some adversity. He probably hasn’t had any in quite a while, if at all. You can see his confidence is shaken a bit. But he’s smart and a competitor. He’ll bounce back at some point.”

“His fastball command is a little off,” Phillies catcher Carlos Ruiz said. “I think he’s trying so hard. He’s pushing himself to get his command back. I know it’s tough. He’s a young kid. He tries so hard to pick it up. He gets himself ready and everything. That’s the only thing I see, you know? We’ve got to move on to the next start, man.”

Nola has said after the past couple of starts that he is not finishing his pitches, which is another way of saying he is not getting his hand on top of the ball before he releases it. It has him pulling pitches out of the strike zone.

“In my eyes, that might be the key,” Nola said.

But it also might be a combination of mechanical and confidence issues.

“Yeah, you can see that a little bit,” Ruiz said, asked if Nola’s confidence is down.

But Mackanin said Nola will make his next start Saturday against the Royals at Citizens Bank Park, if anybody had any thoughts of him ironing out his problems in Triple-A Lehigh Valley.

“You have to battle through adversity; at this level, especially, you see what a guy is made of,” Mackanin said. “I think he has pretty good makeup.”