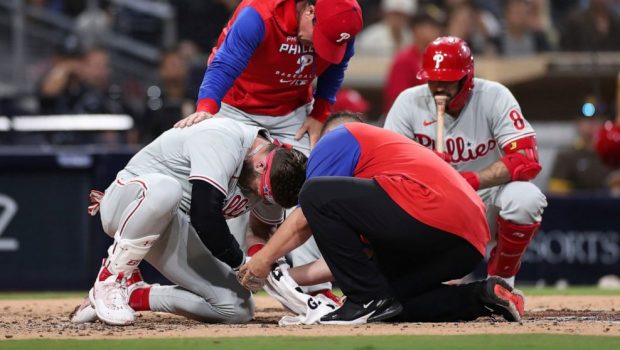 START THE CLOCK ON HARPER’S RETURN AFTER TODAY’S SURGERY

Phillies slugger Bryce Harper will have surgery today on his broken left thumb and manager Rob Thomson has no timetable for his return.

“It’s tough, but it’s probably the best thing for him. So whatever’s best for him is best for me,” Thomson said Tuesday. “If he’s able to come back, which we plan on, then that’s good under the circumstances.”

Harper’s thumb was broken when he was hit by a 97 mph pitch from San Diego Padres left-hander Blake Snell on Saturday night.

The 29-year-old Harper is hitting .318 with 15 home runs, 48 RBIs and a .985 OPS, and has helped the Phillies recently surge back into playoff contention.

“I think this is probably what’s best for him although it’s a broken bone and that’s bad; he’s not happy about that, not being able to play because he wants to play, “Thomson said. “But he’s looking forward to getting back (near) the end of the year.”