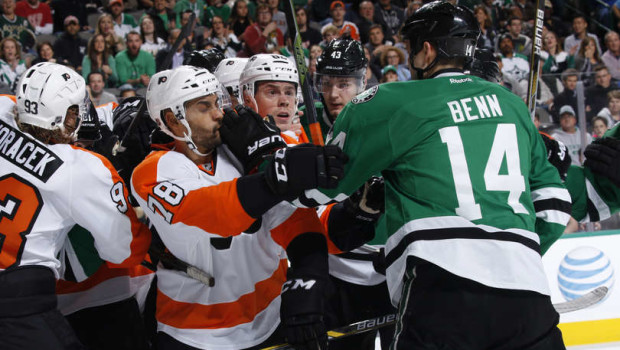 STARS TAKE FIGHT TO THE FLYERS IN 3-1 VICTORY

The Flyers reverted to their old, sleepy selves last night in Dallas.

Antoine Roussel scored the tie-breaking goal late in the second, leading the Dallas Stars to a 3-1 victory over the Flyers.

Roussel pulled the puck out of a pileup in front and sent a wrist shot past Flyers goalie Michal Neuvirth with 2:32 to go in the middle period.

”I saw the puck, so I just had to push it and it was perfect,” the Stars’ left winger said. ”It was right there.

”Most of my goals came from the blue paint or within like 3 feet of it. You get once in a while pretty, but just hard-working goals nowadays.”

Mattias Janmark had tied the score at 1-1 for Dallas with 5:54 remaining in the second. Jamie Benn added his NHL-leading 20th goal into an empty net with 53 seconds remaining, and Antti Niemi finished with 19 saves.

Shayne Gostisbehere scored his fourth power-play goal in 16 career games for Philadelphia at 9:23 of the second. Neuvirth finished with 41 saves.

”I gave everything I had tonight,” Neuvirth said. ”They threw a lot of pucks at the net and they got lucky.”

Mattias Janmark had tied the score at 1-1 on Dallas’ 27th shot of the game with 5:54 remaining in the second. Jason Spezza passed from behind the net to Janmark in the left faceoff circle. His shot went in off a foot of Philadelphia’s Wayne Simmonds.

”You get five, six chances, and you get one off a foot and it goes in,” Spezza said. ”We were persistent tonight.”

Antti Niemi finished with 19 saves for Dallas, including a big one on a third-period power play that could have tied the game.

”We got one huge save Niemi gave us on (Jakub) Voracek,” Stars coach Lindy Ruff said. ”Followed him right across the ice, and that was probably a game saver for us.”

”I thought we played maybe our best all-around game,” Ruff said. ”You could mention anything, and I’d say fantastic.

Notes from the AP:

Giroux has five goals and 10 assists in his last 10 games. … Philadelphia C R.J. Umberger has not scored a goal in his last 33 games, going back to last season. … The Flyers successfully killed all six penalties, and were 1 for 2 on their own power play. … Stars D Jason Demers (upper-body injury) returned after missing three games. … Dallas’ last two wins have come against teams on the second night of a back-to-back. … Dallas won 59 percent of the faceoffs, led by Spezza’s 78 percent (14 of 18). … The Stars swept the season series, winning both games, outscoring Philadelphia 5-2. … Dallas’ 44 shots on goal were the most they’ve had in their 22 seasons against the Flyers.