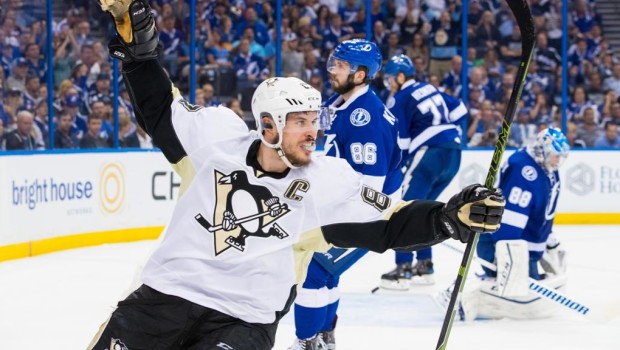 The Pittsburgh Penguins extended the Eastern Conference final with a 5-2, game 6 win against the Tampa Bay Lightning at Amalie Arena last night.

Game 7 is at Consol Energy Center in Pittsburgh on Thursday, with the winner advancing to the Stanley Cup Final.

Penguins goalie Matt Murray made 28 saves, 17 in the third period. Murray was back in net after Marc-Andre Fleury played in a 4-3, game 5 overtime loss.

“He doesn’t get rattled,” Penguins coach Mike Sullivan said of Murray. “If he lets a goal in, he just continues to compete. … Usually it takes years to acquire that, and to have it at such a young age is impressive. That’s always impressed us about him. Certainly it’s impressed me since I’ve got to know him and watch him as a goaltender but also as a person.”

Murray, who was pulled from a 4-3, game 4 loss after giving up four goals in two periods, had to survive a push from the Lightning before the Penguins scored two late goals.

Brian Boyle scored twice for the Lightning, who lost game 6 in a series for the third consecutive time. Tampa Bay also lost Game 6 of the 2015 Eastern Conference Final at home to the New York Rangers before winning Game 7 on the road (2-0).

“We had a great chance tonight and kind of tiptoed around it a little bit,” Boyle said. “We were tentative and weren’t aggressive. We weren’t on top. We weren’t skating.”

Kessel gave the Penguins a 1-0 lead with 1:14 remaining in the first period on a power-play goal. Pittsburgh had a two-man advantage after Victor Hedman joined Anton Stralman in the penalty box on a delay of game. Kessel deflected a pass from Crosby into the net for his ninth goal of the Stanley Cup Playoffs.

Pittsburgh took a 2-0 lead 7:40 into the second period on Letang’s second goal of the playoffs. With Patric Hornqvist providing a screen, Letang took a wrist shot from the right circle that beat Lightning goalie Andrei Vasilevskiy high on the stick side.

“These are the types of circumstances where you have an opportunity to write your own story, and that’s what we wanted to do,” Sullivan said. “There’s certain things that go on out there that you can’t control, but what you can control is your attitude, your determination, your work ethic, your never-say-die mindset.”

Crosby’s scored his third game-winning goal of the series with 26 seconds remaining in the period. He skated around Stralman and beat Vasilevskiy with a wrist shot through the five-hole to make it 3-0.

“As soon as I turned with the puck, I could tell they were probably in the middle of coming up the gap,” said Crosby, who has six goals this postseason. “So I just tried to get some speed off that turnover there that [Hornqvist created], and had a lane and just tried to hit it. That’s a great play by him; if he doesn’t backcheck, it’s probably a nothing play and they’re going back the other way.”

Boyle’s first goal, at 5:30 of the third period, came when his centering pass to Braydon Coburn was tipped by Kessel and got past Murray to make it 3-1.

Boyle made it 3-2 with 7:17 left off a wrist shot from the left circle that beat Murray in the top left corner. Slater Koekkoek had one of the assists, his first NHL playoff point.

Rust got behind the Lightning defense for a breakaway goal to make it 4-2 with 2:08 remaining. Bonino scored an empty-net goal with 54 seconds left.

“It’s nice to get out to a lead, but we knew they were going to make a push,” Penguins forward Chris Kunitz said. “We don’t want to sit back, but you see the speed and skill plays [Tampa Bay] has when they can move the speed through the neutral zone. We have to be better at not letting them get into that game. I’m sure that’s what they want to do to us for the first 40 minutes and not let us get in our game.”