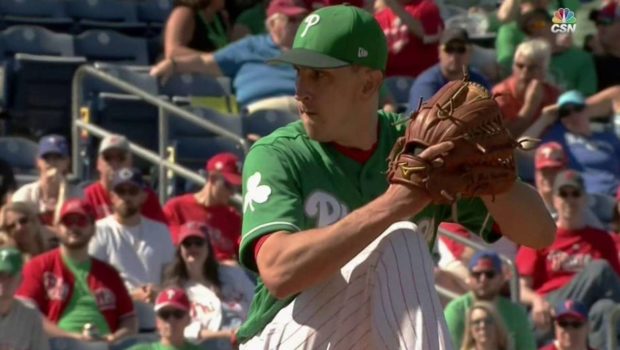 After making his Phillies debut against the Blue Jays in Grapefruit League action yesterday in which the Phillies lost 7-5, Pat Venditte was thrown a curve.

Pitching the ninth inning, he struck out the side. Against right-handed hitters Jon Berti and Juan Graterol, he threw from the right side. In between, he threw lefty against left-handed swinging Rowdy Tellez.

“This isn’t my first time moving to another team, but when you get to a new team, you definitely want to start on the right foot and go out there and fill up the strike zone,” the 31-year-old who has also been with the A’s, Blue Jays and Mariners told MLB.com. “I think I was able to do that and was very pleased with my first showing.”

Venditte paused, then grinned. “That’s a good one,” he said. “I’ve heard a lot, but that’s the first time I ever heard that one.”

Manager Pete Mackanin got into the act as well.

“I liked the way he threw. He mixed it up from both sides. I guess he’s going to go in and ice both his arms now,” Mackanin said.

Actually, he doesn’t ice at all.

The Phillies didn’t trade for Venditte last week to be a sideshow. They traded for him because they have only four left-handed pitchers in camp and are hoping that he can give them a little help from that side against left-handed hitters.

The St. Patrick’s Day game drew a crowd of 11,173, the third-largest in the 14-year history of Spectrum Field.

The Phillies, as is their tradition, wore green hats and jerseys.