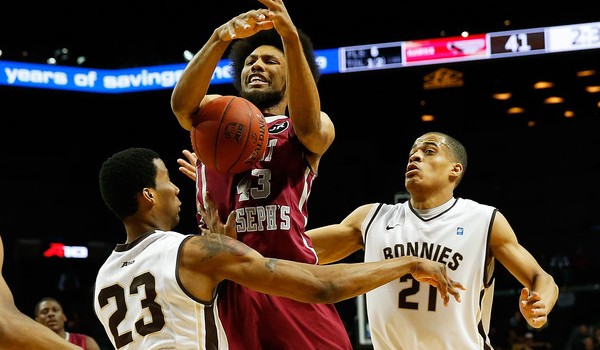 The Hawk may never die.

Youssou Ndoye scored 18 points and Dion Wright added 15 points as St. Bonaventure completed a three-game sweep of St. Joseph’s this season with a 60-49 victory in the second round of the Atlantic-10 tournament.

The seventh-seeded Bonnies (18-12) advanced to face No. 2 Dayton today at Barclays Center. St. Bonaventure has won four straight heading into the quarterfinals.

St. Joseph’s (13-18), the defending A-10 tournament champion, went cold offensively in the second half, shooting 17 percent from the field and scoring 21 points.

DeAndre Bembry (photo above), the conference’s leading scorer, went 3 for 14 from the field and scored 12 points for the 10th-seeded Hawks. Isaiah Miles had 19 points.

Marcus Posley’s fast-break layup with 2:25 left gave the Bonnies a 49-41 lead, the largest of the game to that point.