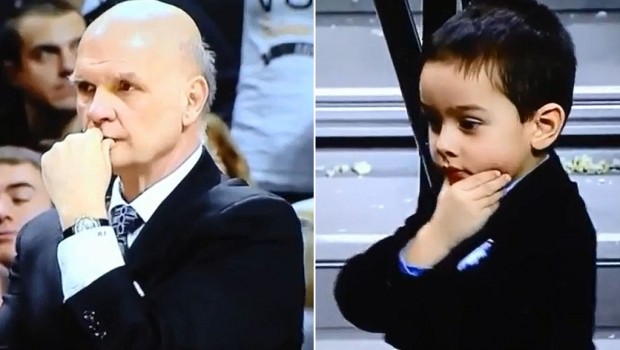 It may seem a bit early to be posting about college basketball, but in Philly it is never too early.

Phil Martelli, the long time St. Joseph’s head coach, lost several key players from last year’s team that won the Atlantic 10 Tournament and nearly beat eventual national champion Connecticut in the Round of 64. CBS Sports Network and CBSSports.com’s Jon Rothstein discussed with Martelli last March’s difficult loss to the Huskies, DeAndre Bembry, and what lies ahead for the Atlantic 10 during the 2014-15 season.

Q: How weird is it to start a season and not see Langston Galloway, Ron Roberts, and Halil Kanacevic out on the court for practice?

A: You think you would be used to it from the time you spend with the team in the summer and in individual workouts, but even just now, trying to say that we’re going to put in one thing and knowing that those three guys — with their IQ’s and their experiences — would allow that to happen with minimal talk and more “do.” Obviously there’s going to be a lot of talking and repeating with this group. I miss those guys, but the attitude of this team is reflective of what they’ve left behind. It’s a very hard-working group and it’s a group that walks with a swagger and carries themselves a certain way. That’s going to be important because there’s going to be some rough times and we’ve got to get through it with the characters of the players.

A: The last game those seniors (Galloway, Roberts, Kanacevic) played at Saint Joseph’s was an overtime loss to UConn in the Round of 64 in last year’s NCAA Tournament. What was it like watching the Huskies win a national championship after coming so close to beating them?

Q: I’m not really like a cliche’ kind of guy — but it was surreal. When I was in Dallas that night sitting and watching that game and realized they (UConn) were going to win the national championship, I could only express it as a Philadelphian — I said “holy bleep.” Not that I envisioned that that would have been us and I didn’t take solace in the fact that we played great against them because we let a game get away against them. I take it as a tribute to what the NCAA Tournament is. It’s so dramatic that every team that was in the tournament could probably say we lost at this moment or we lost because of this play. I congratulate them and I haven’t looked at the tape nor will I look at the tape. I haven’t had a lot of conversations that started with “what if?”

Q: We saw DeAndre Bembry flourish last season as a freshman as an ancillary piece to the puzzle. What changes for him as he now undertakes a bigger role as a sophomore?

A: First of all, I think that the way he’s carrying himself shows that he’s going to enjoy this. He’s relishing this. He’s anxious for this to be “his time.” He’s worked very, very hard. Rather than being the guy talked at — which happened last summer and last year — he’s the guy that’s doing a lot of talking. Not just with his teammates but with me too. He tells me what needs to be cleaned up. He has a special mind and a special heart and I think he has a special game.

Q: Bembry was an impactful first-year player last season and now you bring in another key freshman in James Demery. How critical is his production as your program begins a new chapter

A: James is first and foremost an unbelievable kid. He’s just not a normal 18- or 19-year-old. His mom did a terrific job with him and his coaches did a terrific job with him. He has a beautiful, beautiful soul. What we need to find out is how much can he take in? How much can he absorb? I think he’s here to be honest with you because he knew he’d have a big piece of the pie to eat. I feel confident in his abilities. I felt really comfortable last year with DeAndre (Bembry) and I feel the same level of comfort this year with James.

Q: The Atlantic 10 had a banner year last season and sent six teams to the NCAA Tournament. How does the league build on that momentum and stay relevant nationally despite the fact that many programs lost several key pieces from last season?

A: Scheduling is a big deal. Check the schedules. The coaches are backed by their administrators and backed by their presidents and encouraged by the league office to schedule properly. I think that winning begets winning. I think the teams that were on the outside of those six that made the NCAA Tournament look at it and say “this year it’s going to be us.” I think that’s a healthy competition. And the incredible balance doesn’t change. The coaches are now being charged with getting our preseason ballots in. I would bet you that if I did the ballot today it would look one way. If I did it Thursday, it would look a different way. I think VCU is going to be a team that plays with a number in front of it all year long. How high is that number? I think anything is possible. With the way that they play and the support that they have and the style that they teach, that’s a Top 15-20 team. After that, there’s going be a lot of shaking out between two and 12. The league is going to have extraordinary balance. We have to take care of business again in both scheduling and winning those 50-50 games.