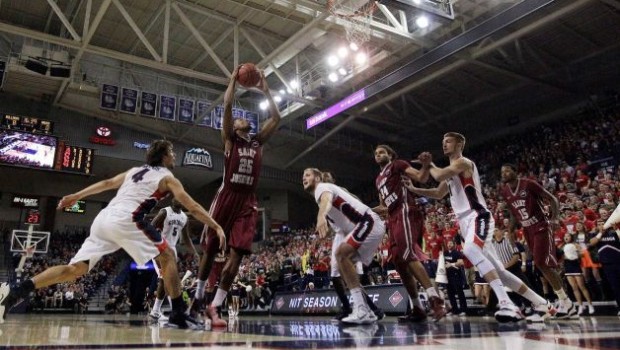 When a basketball team shoot 3-for-28 and scores 10 points in the first half, it is not surprising that a team will lose 94-42.

There wasn’t a whole lot to add after No. 13 Gonzaga dismantled Saint Joseph’s 94-42 on Wednesday night, sending the Hawks to their worst defeat in team history.

“The score speaks for itself,” said Byron Wesley, who scored 12 points and added six assists for Gonzaga. “I’m pleased by how hard everybody played.”

Gary Bell Jr. scored 18 points to lead five Bulldogs in double figures. Josh Perkins added 13 points for Gonzaga (3-0), which has yet to surrender more than 58 points in a game this season. Domantas Sabonis added 10 points and 11 rebounds.

Aaron Brown scored 14 points for cold-shooting Saint Joseph’s (1-2), whose previous five games against Gonzaga had all been close.

Saint Joseph’s scored just 10 points in the first half, when they made just 3 of 28 shots.

“I’ve never seen a first half like that,” Wesley said.

“That was honestly one of the best defensive games I’ve been in,” said Gonzaga’s Kyle Wiltjer. “We take pride in our defense.

The Hawks shot just 26 percent in the game, including 2 of 18 on 3-pointers. Gonzaga sank 57 percent of its shots to coast to victory. The Zags hit 10 of 22 from beyond the arc and outrebounded Saint Joseph’s 54-26.

The 52-point loss for Saint Joseph’s topped a 40-point setback to No. 2 Kansas in 2004. Their 42 points were tied for second-lowest scored in team history.

“That was an ability thing,” Saint Joseph’s coach Phil Martelli said. “It was a lesson learned in how to play.”

Martelli said he apologized to Gonzaga coach Mark Few after the game.

“We didn’t make them (Gonzaga) do anything,” Martelli said.

Offense has been a problem for the Hawks, who have yet to score more than 57 points in a game.

The Hawks trailed 23-5 at the midpoint of the first half, making only 2 of 12 shots. Gonzaga’s smothering defense held the Hawks to three baskets in the first 12 minutes of the game as the Bulldogs built a 31-7 lead.

It went downhill for the Hawks from there.

Saint Joseph’s did not make a field goal for the final 8 minutes of the first half, and made just 3 of 28 shots in the first half, for 10.7 percent. Gonzaga made 61 percent of its first-half shots, including 5 of 7 on 3-pointers by Bell.

Gonzaga substituted liberally in the second half, but the Zags’ depth made it difficult for Saint Joseph’s to make up much ground.

The Hawks’ James Demery (photo above) finally scored on a lay-up with 17:15 left in the game, their first field goal in nearly 11 minutes. Baskets started falling a little more regularly for Saint Joseph’s after that.