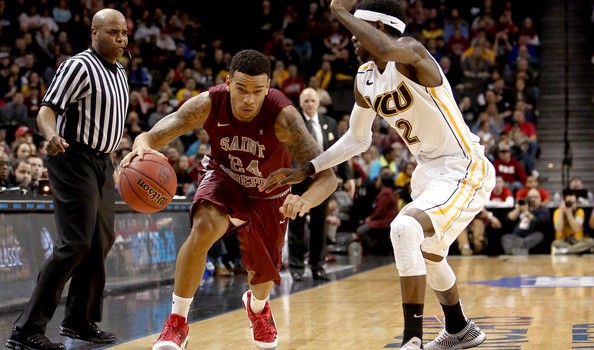 ST. JOSEPH’S HAS BIG SHOES TO FILL IF IT WANTS TO DANCE IN MARCH

The Hawks were squarely on the NCAA tournament bubble last season after losing their final two regular season games, but they rebounded to win the A-10 Tournament title, securing an NCAA bid. That Saint Joseph’s team relied on their starters to play a lot of minutes and, as a result, this year’s team is quite inexperienced, as three key players depart. Coach Phil Martelli has a challenge this season, as he must find replacements for those players, but there is plenty of talent on the roster to fill those spots.

Who’s Out:
The Hawks have some big shoes to fill as three All A-10 players depart, led by Langston Galloway. Galloway, a First Team All A-10 selection, led the Hawks in scoring last season, averaging 17.7 points per game from his starting slot in the backcourt. Also departing will be two key frontcourt starters, Ronald Roberts Jr. and Halil Kanacevic. Roberts, a 3rd Team All-A-10 selection, was second on the team in scoring, 14.4 points per game, and rebounding, 7.4 per game. Kanacevic started alongside Roberts in the frontcourt and was a do it all man for the Hawks. The A-10 Tournament MVP and a Second Team All-A-10 selection averaged 10.8 points per game while leading the team in rebounding, 8.8 per game, and assists, 4.4 per game, last year. Forward Daryus Quarles, who averaged 2.4 points per game last season, has also run out of eligibility, while the trio of Colin Kelly, Kyle Molock and Eric Kindler also depart. Molock saw the most playing time out of the bunch, 28 minutes on the season, but he saw his career end after another knee injury.

Who’s In:
Saint Joseph’s has two players who are eligible to play after sitting out last season and four incoming freshmen recruits who will join the team for 2014-2015. Headlining the newcomers will be West Virginia transfer Aaron Brown. The 6-foot-5 guard averaged 4.2 points per game at WVU as a freshman in 2012, but saw his numbers drop as a sophomore before transferring. He will be joined by 6-foot-9 forward Jai Williams, a local product who redshirted in his first season on campus. With a year under their belt in Martelli’s system, they may have a leg up on the other newcomers, but the four freshmen all come in highly regarded. All four were three-star recruits in the major recruiting rankings and could be in the mix for early playing time. Shavar Newkirk, a point guard from the Bronx, averaged 17 points and four assists as a high school senior, while small forward James Dempsey averaged 18 points per game at Northside Christian Academy in Greenville, North Carolina. The two remaining recruits, 6-foot-9 Obi Romeo and 6-foot-6 Markell Lodge, will bolster the frontcourt.

Who to Watch:
Just two starters remain from last season’s team, so some reserves will need to step up into bigger roles. The starters who do return are very talented and will be relied on this year. DeAndre’ Bembrey, last season’s Co-Rookie of the Year in the A-10, is back after averaging 12.1 points per game as a freshman, while point guard Chris Wilson (photo above) returns for his senior season after averaging 9.1 points and 2.8 assists per game last year. All five Hawks starters played over 32 minutes per game last season, so reserve minutes were scarce, but some players played well in those minutes. Forward Isaiah Miles averaged 3.0 points per game while playing in 28 games off the bench, while forward Papa Ndao saw action in 32 games, including two starts, and averaged 2.5 points per game. Center Javon Baumann and guard Evan Maschmeyer both averaged less than two points per game last season, but could see their minutes rise this season, while Brendan Casper played in eight games as a freshman.

Final Projection:
The Hawks lose a lot of production off last year’s team and it will be tough to replace those key players. Bembrey showed his star potential as a freshman, but he will need some people to step up around him. The six-man class of newcomers could end up being key to the success of the team this season. If a couple of those newcomers can step up and combine with the returnee’s like Miles and Ndao to provide a solid supporting cast, the Hawks could have some success again this season.