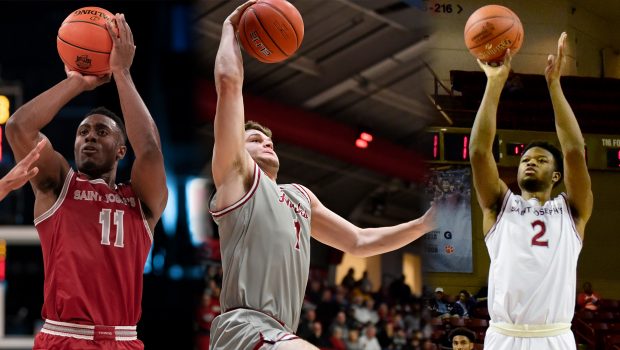 The St. Joe’s Hawks will have five national television appearances in their Atlantic 10 Conference schedule.

The league also made adjustments to its traditional schedule model to factor in potential interruption from the COVID-19 pandemic. There will be at least nine conference games played in December, and each team will have two bye dates between Jan. 13 and Feb. 24, and the weekend of March 5-7 will be left open. These measures provide windows for make-up dates and spreads the schedule out to accommodate any contest needing to be rescheduled.

Saint Joseph’s opens A-10 play at Hagan Arena against VCU on December 30 before traveling to Rhode Island for a NBCSN contest with the Rams on January 3 at 4:30 p.m. Following a road trip to St. Bonaventure (January 6), the Hawks return home to host Saint Louis at 6 p.m. on January 9 on NBCSN.

Three consecutive road trips follow for SJU as they start at Davidson (January 12), then head to Big 5 rival La Salle for a CBSSN matchup on January 18, and finally travel to George Mason (January 20). The Hawks cap a home-and-home with Patriots on January 23 at 12:30 p.m. on NBCSN, and remain home to host Richmond on January 26.

A road trip to Duquesne (January 30) is followed by home contests against St. Bonaventure (February 3) and La Salle (February 6), with away games at Dayton (February 13) and George Washington (February 17) up next for Saint Joseph’s.

The Hawks cap conference play with three of their final four games at Hagan Arena starting with a NBCSN televised contest versus Davidson on February 20, and wrap it up with matchups against Massachusetts (February 24), at Fordham (February 27) and versus Rhode Island (March 2).

Additionally this season, 11 games of the 2021 Atlantic 10 Men’s Basketball Championship at Barclays Center will be nationally broadcast. NBCSN will carry the second round and the quarterfinals, March 11-12, and CBS Sports Network will air the semifinal games on March 13. CBS Television Network will broadcast the March 14 final at 1:00 pm ET as part of the network’s overall NCAA Selection Sunday coverage.