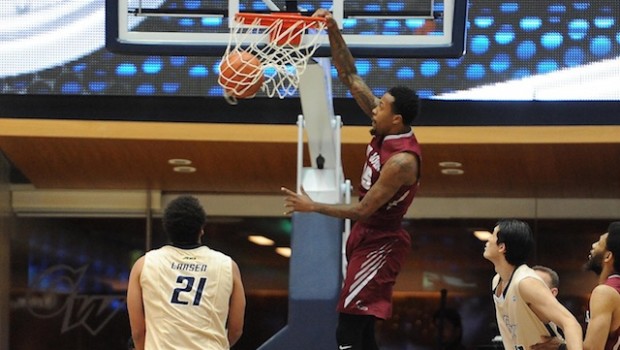 Isaiah Miles (above) had 26 points and nine rebounds and St. Joseph’s knocked off top-seeded Dayton 82-79 in the Atlantic 10 Tournament semifinals today at the Barclays Center in Brooklyn.

The fourth-seeded Hawks (26-7) advanced to the A-10 finals for the second time in three years and will face the winner of VCU-Davidson on Sunday.

Aaron Brown added 16 points and Papa Ndao had 14 for the Hawks on a day when A-10 regular-season player of the year DeAndre Bembry was held to nine.

After taking a seven-point lead at halftime, St. Joseph’s extended it to an 11-point lead midway through the second half.

Dayton was within 55-52 on a basket by Kyle Davis with about 8 1/2 minutes remaining. The Hawks surged ahead on two 3s by Ndao for a 64-55 lead with 5:25 lead. Two baskets by Dayton in the final seconds made the final margin closer.