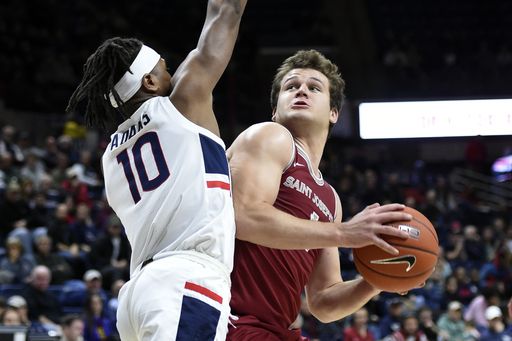 Saint Joseph’s guard Ryan Daly took to Twitter last night to announce he was going to test the NBA waters.

But the high-scoring guard will probably be back for next year’s senior season on Hawk Hill.

“At this time, and after several conversations with my family and Coach (Billy) Lange, I am announcing that I have submitted my name into the NBA Draft committee to seek feedback about pursuing my dream of playing in the NBA,” Daly tweeted. “While this is a step in that process, the feedback will allow me to make the best decision moving forward, with the potential to return to Hawk Hill for one more year in Crimson and Gray. While I’m not sure what the next couple of months may hold as far as my playing career goes, I know that THE HAWK WILL NEVER DIE!”

Daly, a transfer from Delaware, averaged 20.6 points, 6.8 rebounds and 4.2 assists for the Hawks, who struggled through a 6-26 season. He finished 21st nationally in scoring and earned third-team All-Atlantic 10 honors.

With the NBA shutdown due to the coronavirus pandemic, the draft process is in limbo. The NBA Draft Combine is scheduled for May 21-24 in Chicago. The early entry withdrawal deadline is 5 p.m. June 15. The draft is slated for June 25, but those dates could be moved.

“We support Ryan and his family in this decision,” Lange wrote on Twitter. “They have been transparent and diligent from the strt of this thought process. Ryan’s passion for Hawk Hill is evident and we are excited for him. Everyone with Saint Joseph’s basketball will provide Ryan with all he needs to help him chase his dream.”