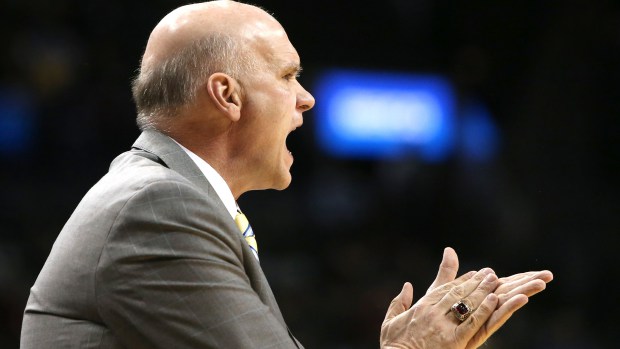 If St. Joseph’s season opener is a harbinger of things to come, Hawks coach Phil Martelli (photo above) would probably want to start over.

Mustafaa Jones scored 13 points, including the go-ahead 3-pointer with 4 seconds left, to help Fairleigh Dickinson slip past Saint Joseph’s 58-57 in the season opener for both teams on Friday night on Hawk Hill.

Trailing 51-47, Fairleigh Dickinson’s Earl Potts Jr. pulled down an offensive rebound off a missed 3-pointer and his put-back cut the deficit to 2 with 3:35 remaining.

He then came up with a steal, setting up a jumper from Jones which tied it at 51.

A pair of 3-pointers by DeAndre Bembry and Chris Wilson, which were sandwiched around a Xavier Harris layup, extended St. Joe’s lead to 57-53 with 1:13 left.

Harris scored on another layup and, after a missed 3-point attempt from Wilson, Jones hit the winner.

Fairleigh Dickinson made just 22 of 56 field goals (39.3 percent) and was out-rebounded 44-28 but forced 16 turnovers, including three steals by Jones.