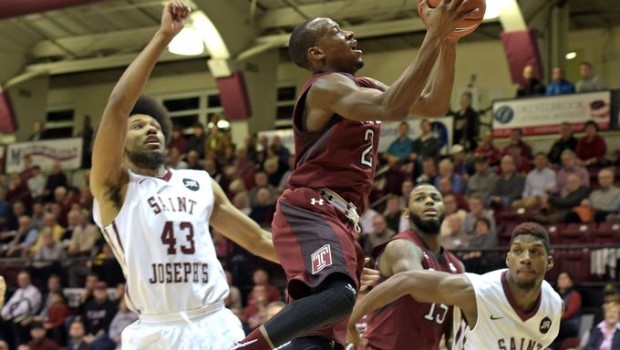 It was a Big 5 game, so as the man said throw all the records out the window.

But in this case, Temple and St. Joe’s played a classic game up on Hawk Hill.

Isaiah Miles had 20 points and nine rebounds on Wednesday night, and the Hawks held off a late rally to beat Owls 58-56.

Saint Joseph’s (4-3) led by two after Miles made 1 of 2 free throws with 11.7 seconds left. DeAndre Bembry blocked Will Cummings’ floater off the backboard with 5 seconds left. Temple (4-3) got the rebound, but Quenton DeCosey came up short on a driving attempt at the buzzer.

Bembry made another pair of free throws to push the lead back to five before the Owls closed to 57-56 on Josh Brown’s putback with 30 seconds left. Bembry finished with 11 points and seven rebounds.

DeCosey led the Owls with 22 points and Cummings (photo above) added 13.