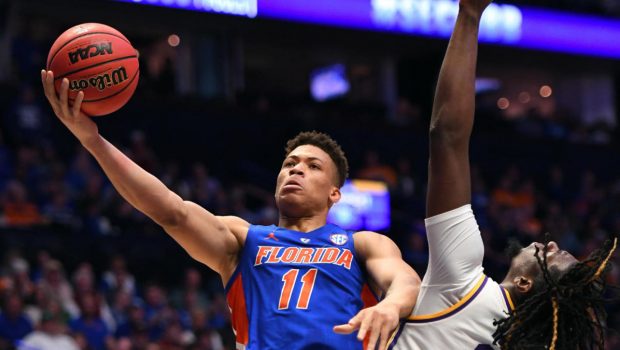 ST. JOE’S FOUGHT BACK BUT CAME UP SHORT AGAINST FLORIDA!

Keyontae Johnson had a career-high 22 points to lead the Gators to a 70-62 victory over Saint Joseph’s at the Charleston Classic.

The Gators’ Kerry Blackshear Jr. missed almost all of the game. He played three minutes in the first half after picking up two fouls. Then he was thrown out when he was battling underneath and his elbow looked like it hit Saint Joseph’s guard Taylor Funk. Blackshear, who came in averaging 14 points and 12 boards, was called for a flagrant two foul and sent off the court.

Blackshear’s departure seemed to energize the Hawks (2-3), who trailed 43-27 when the Florida star left the court. That’s when St. Joseph’s went on a 29-16 spurt to cut it to three points on Funk’s basket with six minutes left.

But Johnson followed with a basket and Andrew Nembhard made another to extend the lead.

St. Joseph’s had one last charge, slicing things to 64-62 on Ryan Daly’s layup in the final minute. The Hawks had several chances to tighten things, but could not. “We’re not going to go down easy,” Daly said.

Florida will take on Miami here Friday for a spot in the Charleston Classic finals.

Florida took control quickly and appeared to make this a runaway as Noah Locke had two 3-pointers and Nembhard also hit one from behind the arc as the Gators went ahead 11-2 less than two minutes in and steadily built its lead.

St. Joseph’s had hit 34 first-half 3s combined its first four games. It made just one of its 14 long-range attempts this time as it fell behind.

Daly led the Hawks with 25 points.