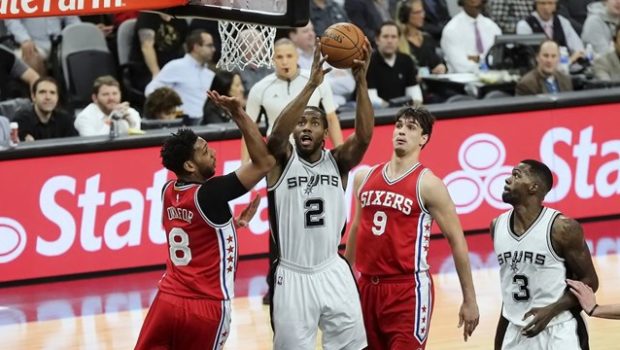 Gregg Popovich tied the NBA record for the most career wins with a single franchise, earning his 1,127th in the Spurs’ 102-86 victory over the Sixers last night.

Popovich matched Jerry Sloan of Utah for the league mark, but did so while saying he’s not the equal of the coach who resigned in 2011 after 23 seasons with the Jazz.

“He’s in a different league than me,” Popovich said.

Sixers coach Brett Brown said that’s nonsense. He spent 11 seasons with San Antonio before joining the 76ers and is one of Popovich’s closest friends.

“In 2017, where professional sports are so ruthless and cutthroat, survival rates and people that can last are rare,” Brown said. “He would say, ‘Well, that must mean I’m old.’ I think it means he’s good, really good.”

Popovich’s abilities are evident this season. San Antonio has seven new players on its roster and lost franchise stalwart Tim Duncan to retirement in the offseason.

Despite the turnover, the Spurs maintained the league’s second-best record at 38-11 with their 12th straight victory at home over Philly and 11th straight overall against the 76ers.

“It’s amazing,” Spurs veteran Tony Parker said. “To have Pop up there, he’s going to keep going. It looks like he’s not getting tired, he’s not going to stop anytime. It’s very impressive to coach that long and keeping your team motivated with the same message, it’s not easy.”

San Antonio had 15 steals and forced 23 turnovers, both season-highs, as both teams played shorthanded.

The frontcourts for both teams were depleted, with San Antonio missingLaMarcus Aldridge and Pau Gasol, and the Sixers without Joel Embiid, Nerlens Noel and Robert Covington. Aldridge and Embiid were both late scratches with minor knee ailments.

Kawhi Leonard scored 19 points and Dewayne Dedmon had 13 points and 10 rebounds for his second double-double for the Spurs.

“I think Dewayne Dedmon was the star of the show tonight,” Popovich said. “Everything he did was great.”

The 76ers’ frontcourt got 25 points and 10 rebounds from Ersan Ilyasova, and Dario Saric added 14 points.

“I think defense was the key in the second half,” said rookie Davis Bertans, who finished with 12 points. “If you can keep teams to 33 points a half, I think you’ll win all the games.”

Ilyasova had seven points during a 14-2 run beginning midway through the second quarter that gave the Sixers their first lead at 44-40.