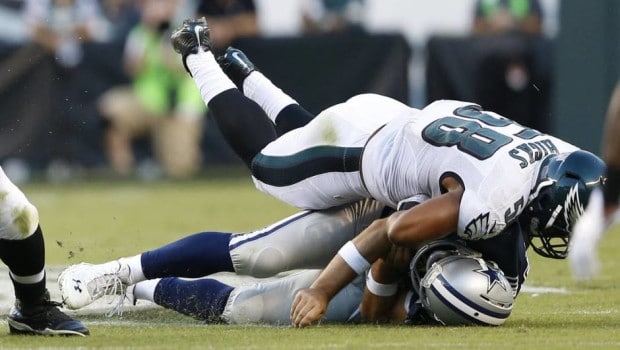 If you’re looking for an added reason to like the Eagles in tonight’s NFC East showdown with the Giants at the Linc, look no firther than:

Rookie inside linebacker Jordan Hicks (above, crashing Tony Romo’s season), who will no doubt start and play practically the entire game.

He has recovered fumbles in three straight games, making him the first NFL rookie to do that since Jack Del Rio in 1985 playing for the New Orleans Saints.

Hicks can become the first Eagle to have a fumble recovery in four straight games since Byron Jones in 1993-94.

Hicks has played the most snaps of any of the Eagles’ inside linebackers this season despite not playing in the opener.