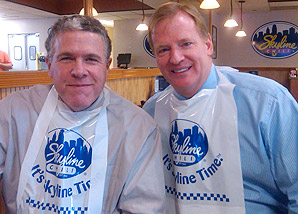 TO SI’S PETER KING, MENTAL ILLNESS IS A ‘CHARACTER FLAW’!

So Peter King, the NFL’s ambassador to Sports Illustrated (here sucking up to NFL commish Roger Goodell), published something stupid and offensive in this morning’s edition of his weekly Monday Morning Quarterback column: his own writing. Within that, though, a particular passage, explaining the Dallas Cowboys’ selection of University of Nebraska pass-rusher Randy Gregory with the 60th pick of this past weekend’s NFL draft, presents as particularly awful.

When it got close to pick 60, I’m told a serious conversation wasn’t needed; Gregory was such a strong candidate as a player that Dallas was willing to work with him on his marijuana history, and his history of depression and anxiety, according to SI.com’s Don Banks. Other reports say Gregory was either bipolar or had some other personality disorder that made it difficult for him to focus on football, or anything, for long periods. Gregory, without question, was a top-10 value on talent alone. But he tumbled down so many draft boards because of his character flaws.