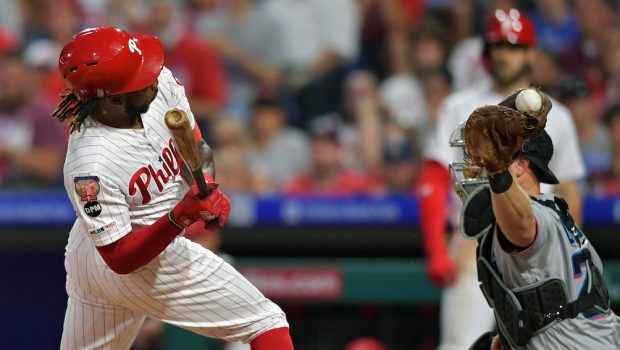 Not even a gem from Phillies ace Aaron Nola could stop their slide into NL East oblivion.

And not even a pre-game retirement ceremony for the great Chase Utley could inspire a jump-start for their offense, pardon the expression.

”He was awesome,” Holaday said of his battery mate. ”He grinded, he competed. Coming off two extra-inning games, we needed him to go deep and he delivered.”

The Phillies have lost five in a row. They’re 6-14 since May 29 and have lost eight games in the standings after holding a 3 1/2-game lead in the NL East.

”Our guys can swing the bats better,” manager Gabe Kapler said. ”We have to improve.”

Nola (6-2) allowed two runs – one earned – and six hits, striking out 10 in eight innings. Nola lowered his ERA to 4.55 with his longest outing of the season.

The Marlins went ahead in the sixth after Brian Anderson got hit by a pitch to start the inning and moved to third on Starlin Castro’s single. Anderson scored when third baseman Scott Kingery bobbled Cesar Puello’s slow roller for an error.

Holaday connected in the second, driving his second homer out to left-center to give the Marlins a 1-0 lead.

The Phillies tied it a 1 in the third when Roman Quinn stole home. Quinn led off with a double and went to third on Bryce Harper’s single. After Rhys Hoskins flied out, Jay Bruce struck out swinging. But Harper stole second on the third strike and Quinn scooted home on the throw.

Alcantara escaped trouble in the second after Kingery hit a two-out double and Cesar Hernandez was intentionally walked to bring up Nola, who was batting eighth. Nola ripped a liner to right but Puello was playing him the opposite way and easily made the catch.