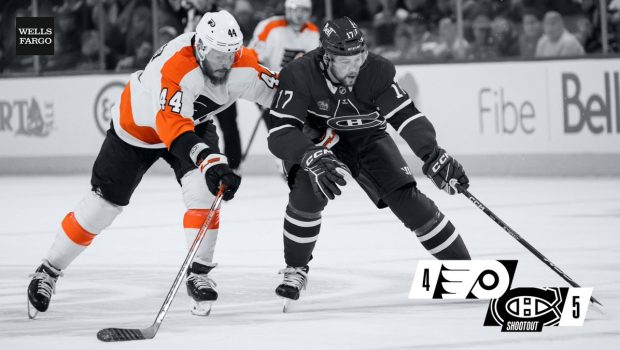 Cole Caufield scored with three seconds left to force overtime and the Montreal Canadiens beat the Flyers 5-4 in a shootout.

Caufield scored his second goal of the game, beating Carter Hart with a one-timer from the left side with Montreal goalie Jake Allen off for an extra attacker.

Owen Tippett scored twice for Philadelphia, Travis Sanheim had a goal and an assist and Hart made 28 saves. The Flyers are 0-4-2 in their last six.

The Flyers took control with two early goals. Scott Laughton followed a missed shot from the slot with a backhand pass to Sanheim who broke the ice 39 seconds into the game.

Philadelphia doubled its lead at 2:55 of the first period when Tippett carried the puck from his own zone and beat Allen glove side with a wrist shot.

Tippett shocked Allen by shooting off the faceoff and tied the game at 3-3 just under four minutes later.

Hayes found the Flyers’ go-ahead goal when he grabbed the puck following a blocked shot and scored from atop the left face-off circle 8:17 into the third.