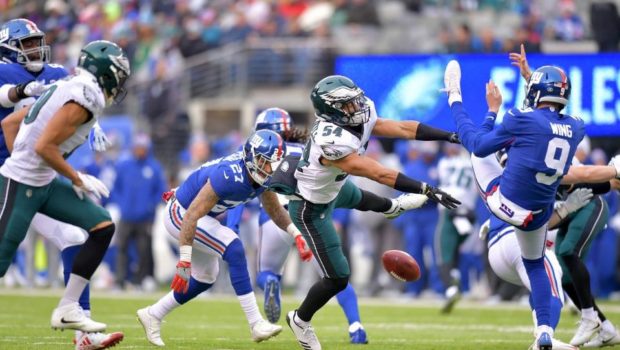 A VERY SPECIAL TEAM! HOW EAGLES BLOCKED THEIR WAY TO A WIN!

The Eagles’ defense was woeful for much of yesterday’s 34-29 win over the Giants.

So you can make the case with a straight face that the special teams came to the Birds’ rescue!

The Eagles blocked a Giants’ extra point early as well as a field goal later in the game. They also blocked a punt.

Dave Fipp’s special teams had the biggest impact on the game for the Eagles this week.

The Giants got all the way down to the Eagles six-yard line, but they were unable to get into the end zone. If the special teams didn’t block two kicks and a punt, it would’ve been a completely different game.

Later in the game, up just two points with under 12 minutes to go in the fourth quarter, special teams stepped up once again. Rosas’ field goal attempt was blocked by Malcolm Jenkins, preserving the Eagles’ lead.

And then there was the blocked punt, either. In the second quarter, special teams standout Kamu Grugier-Hill (above) blocked Brad Wing’s punt. The play gave the Eagles the ball on New York’s 18-yard line. They proceeded to score a touchdown in just three plays.