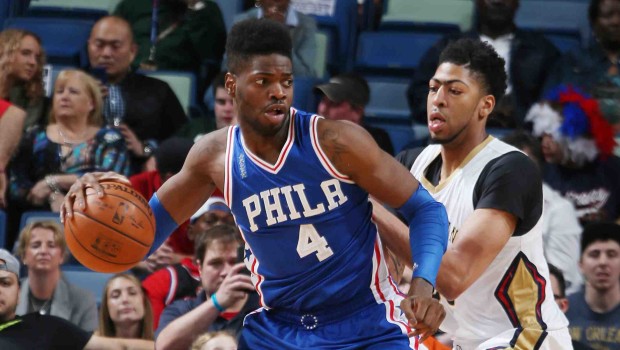 SOUNDS LIKE SIXER NERLENS NOEL IS READY TO GO HOME TO BOSTON!

On his Twitter page, Nerlens Noel’s bio reads, “#BostonStrong – Former Kentucky Wildcat – Current Philadelphia 76er!!” The Everett, Mass., native has a similar message on the bio page of his Facebook account as well.

Who refers to the team they play for as “current?”

A player who wisely suspects that “current” label will become “former” sooner rather than later.

Noel has not asked for a trade, but multiple league sources told CSNNE.com that he is “very open” to being traded if the Sixers decide to make that decision.

Another league source contacted by CSNNE.com yesterdsay indicated that the Celtics still have a high level of interest in Noel but no deal is imminent.

When the Sixers drafted Ben Simmons with the No. 1 overall pick in June, that created a major logjam for Philadelphia’s frontcourt. Simmons joins a group that includes Noel, Jahlil Okafor, Dario Saric and Joel Embiid.

With five young bigs who are all talented enough to play now, the Sixers will have little choice but to trade away at least one of them or potentially create a locker room with more disharmony.

Every NBA team knows that Philly has to deal at least one of their big men, which is why the Sixers’ discussions by and large have not been fruitful.

When asked by Sirius Radio as to whether he was comfortable going into the season with three centers (Noel, Jahlil Okafor and Joel Embiid), Colangelo replied, “Absolutely not.”

Colangelo added: “We’re not going to make a bad deal just to make a deal. I think we can be a better basketball team if we can distribute that talent better. Maybe take one of those assets and address other needs on the roster. I think right now it’s best to say we like all of them, we want to see if we can make the most out of each of them. At the end of the day, the reality says one has to go at some point but only when the deal is right.”

Will the right deal be struck with Boston, one of the teams Philly had serious trade talks with on draft night?

It won’t be Noel’s decision to make as to where he could be traded to, but all indications are that he would have no problem becoming a Celtic.

“I’m blessed to be from Boston,” read Noel’s most recent Tweet. “Love my city.”