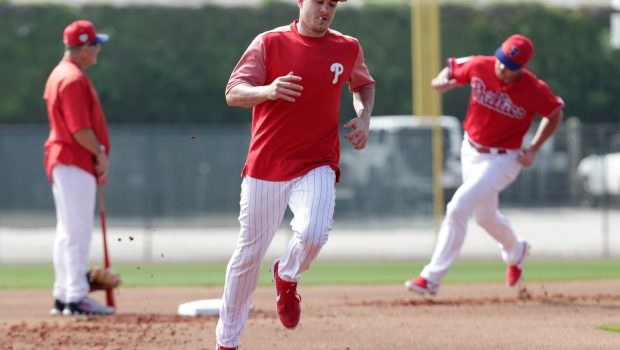 The Phillies loved Manny Machado, perhaps even more than they do Bryce Harper.

They tried to trade for Machado last summer, they met with him in person this winter, and they offered him a lucrative deal — but would not go to $300 million.

The Phillies might do so for Harper, but insist they will not act out of desperation.

Middleton did give that impression in November, when he told Bob Nightengale of USA Today that the team was “expecting to spend money, and maybe even be a little stupid about it.” The Phillies have spent money, but they have not been stupid.

After stumbling down the stretch to an 80-82 finish last season, the Phillies have added four high-impact players, all with All-Star pedigrees: left fielder Andrew McCutchen, catcher J.T. Realmuto (above), reliever David Robertson and shortstop Jean Segura. They signed their ace, Aaron Nola, to a four-year, $45 million contract extension, and added other relievers in trades.

The moves improved a dreadful defense and a lineup that produced the fewest hits in the majors last season. They were prudent, responsible moves, but Middleton’s statement was widely viewed as a promise of something bolder, setting up a binary view of the Phillies’ winter: success (Machado or Harper) or failure (anything else).

So far, the Phillies’ biggest free-agent splash was a three-year $50 million contract for McCutchen, 32, a former Most Valuable Player for the Pittsburgh Pirates. McCutchen will play left field, with the slugger Rhys Hoskins shifting back to first base, his best position. Carlos Santana, who played first base last year, went to the Seattle Mariners in a deal for Segura, who hit .304 with 20 steals last season and once led the National League in hits.