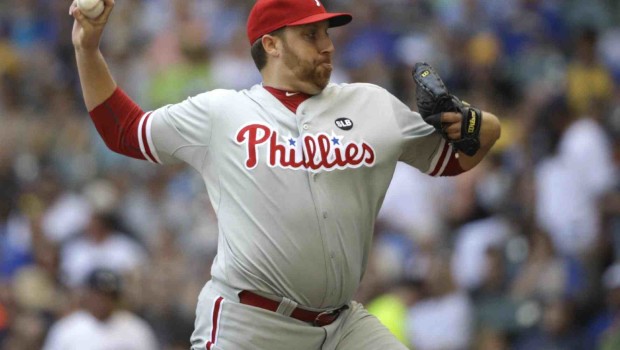 THE SOUND OF SILENCE: PHILLIES’ BATS QUIET IN 6-1 LOSS TO BREWERS

The Phillies’ bats, which were loud during their 16-5 post All Star-break streak through the National League, have gone quiet once again.

And Aaron Harang (above), who kept the Phillies in the game until the fifth inning, broke down once again as the Brewers completed a sweep 6-1 yesterday at Miller Field.

Jungmann bounced back from his first poor outing in the big leagues by working a scoreless 6 1/3 innings and striking out a career-high nine batters. The tall right-hander fanned the side in the first on 11 pitches and again in the third on just 10 pitches. Jungmann allowed three hits and lowered his season ERA in 13 starts to 2.23 with the performance.

“I was confident he was going to bounce back for sure,” Brewers manager Craig Counsell said of Jungmann. “There’s going to be blips in the road, and he came back and pitched a really nice game.” More >

The Phils’ offense was non-existent once again, producing seven hits with the only run coming from a solo shot off the bat of Andres Blanco. The offense went 3-for-28 with runners in scoring position during the three-game series. Starter Harang surrendered a run in the first before Braun’s slam and two subsequent singles ended his day in the fifth.

Braun tied Yount for the franchise lead in home runs in grand style. With the bases loaded in the fifth against Harang, Braun launched his 251st homer to give Milwaukee a 6-0 lead. The grand slam was the fifth of his career and second this season, and it was his 21st homer this year. Braun also drove in Jonathan Lucroy with a groundout in the first, giving the right fielder five RBIs on the day.

“Robin’s obviously the greatest player in franchise history,” Braun said. “He played here for 20 years, accomplished so many amazing things, so any time you are mentioned alongside his name, it’s definitely a special accomplishment.”

Harang kept the Phillies in the game until an ugly fifth inning soured his final line. Scooter Gennett led off with a double and came in to score on a one-out single by Elian Herrera. Harang then fielded Jungmann’s sacrifice bunt attempt, but second baseman Cesar Hernandez was late to cover the bag. After a walk to Lucroy, Harang surrendered Braun’s grand slam.

Adam Lind and Khris Davis followed with singles, causing Phillies interim manager Pete Mackanin to turn to the bullpen. After allowing six runs in 4 2/3 innings Sunday, Harang has a 12.60 ERA over his last two starts and a 9.72 ERA in five starts since July 1.

“I was getting guys out,” Harang said. “I was getting ground balls. Guys weren’t really squaring anything up. It just spiralled out of control really quick.”Blanco broke the shutout with a solo home run to right-center field off Brewers left-hander Neal Cotts in the top of the ninth. Blanco has now homered in each of his past two starts, and he has four home runs on the season.Carlos Ruiz and Jeff Francoeur singled off Cotts, while Darin Ruf walked to put the tying run on deck with two outs. The late comeback attempt fell short, as Brewers closer Francisco Rodriguez came on to retire Hernandez to end the game.

“We made them a little nervous at the end, but I’d rather win the game than make them nervous,” Mackanin said.”