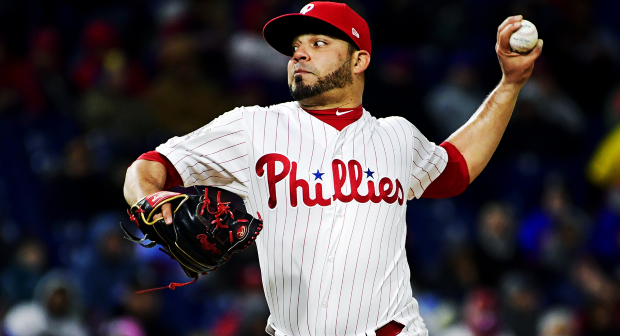 If you’re scratching your head about why the oh-so-slow Phillies front office didn’t pounce on either pitchers Craig Kimbrel or Dallas Keuchel, there are only two possibilities:

GM Matt Klentak believes the Phils pitching is good enough to make the playoffs and go deep — he is wrong about that.

Or he didn’t think that K and K weren’t good enough for the money they ultimately received.

The Atlanta Braves, who zoomed past the Phillies in the East this month, landing Keuchel on a one-year, $13 million contract, and the Chicago Cubs, with whom the Phillies were tied atop the NL wild-card standings entering Tuesday, got Kimbrel on a three-year, $43 million deal.

So, what are the Phillies, who are on pace to give up a staggering 267 homers, doing about their pitching shortcomings? It’s a question fans of the team are asking as the Phillies come out of a disheartening series loss at Atlanta over the weekend — capped by an ugly, 15-1 loss Sunday — and head into this week’s four-game series against the Washington Nationals.

“We’re not even past the All-Star Game yet,” starting pitcher Nick Pivetta told the Washington Post Monday. “Yeah, we lost a lead. But … we still have [91] games left. I agree we haven’t been playing our best baseball, but we’ve also been competing really, really hard every night.”

In the case of Kimbrel, it appears the Phillies were scared off by the length of contract he was seeking, largely as a result of having been burned themselves on multiyear deals with free agent relievers in the past.

Current Phillies relievers Tommy Hunter, David Robertson and Pat Neshek are on multiyear contracts — making a combined $27.75 million in 2019 — and have combined to throw just 24 innings this season.

“There have been reasons why we signed those guys to try to bolster the bullpen, and I’m not saying we’d never do it again, but I do think we need to be mindful of the realities of relief pitcher health, especially multiyear commitments to veteran guys,” Klentak told reporters. “The track record is not great.”

The Phillies’ bullpen should stabilize as it slowly returns to full health. Neshek, a right-handed setup man, recently returned from the injured list, and Roberston and Hunter should be back in the next few weeks, along with Adam Morgan and Seranthony Dominguez. Kimbrel undoubtedly would have helped, but the Phillies can survive without him.

The rotation, though, is another matter. Leave aside for now the struggles of expected stalwarts such as 2018 all-star Aaron Nola (4.89 ERA, 4.0 walks/nine innings) and Pivetta (5.00 ERA, demoted to the minors for a month in April-May).

The fifth starter spot has been a season-long nightmare, highlighted by Sunday’s blowout loss in Atlanta, when the Phillies went from Vince Velasquez to Cole Irvin to Jerad Eickhoff — the top three internal candidates to seize the fifth starter’s job — and watched them combine to give up 15 earned runs in seven difficult-to-stomach innings.

Lacking better options, however, the Phillies appear content to keep winging it with the fifth starter’s job, using Velasquez as the top option, unless he’s needed out of the bullpen to cover innings for someone else. It’s a fine line between that arrangement and simply designating every fifth game as a bullpen game, or deploying an “opener.” But that’s where the Phillies are.

“We have to kind of see who’s available out of our bullpen,” Manager Gabe Kapler said. “And we’re not going to sacrifice today’s game for a game five days from now.”

Keuchel, 55-36 with a 3.37 ERA over the past four seasons, might have looked really good, by comparison, in the Phillies’ rotation this summer — especially because that also would have meant keeping him away from the Braves.

The Phillies haven’t fully explained their hesitance to go after Keuchel, but it is widely believed to have stemmed from the organization’s preference for swing-and-miss stuff — Keuchel is a groundball specialist with high contact rates — as well as perhaps an acknowledgment that their shaky infield defense wouldn’t have been a good fit for that type of pitcher.

“I know we haven’t been perfect in the rotation,” Klentak told reporters. “But by and large our guys have gone out, taken the ball and kept us in games for most of the year … Right now, we’re comfortable with the guys we’re running out there.”

The Phillies, though, are almost certain to be major players on the trade market this summer, heading toward the July 31 deadline, with speculation already building that they will nab someone along the lines of San Francisco Giants lefty Madison Bumgarner or Arizona Diamondbacks right-hander Zack Greinke.

The events of the past couple of weeks have left the impression the Phillies and Braves are heading in opposite directions. While the Phillies have lost 10 of their past 16 games, including two of three in Atlanta over the weekend, the Braves are surging, with 10 wins in their past 11 games — a stretch in which they have scored 90 runs.

Still to come are 13 more head-to-head matchups between the Phillies and the Braves, with the first of them coming in the first week of July.