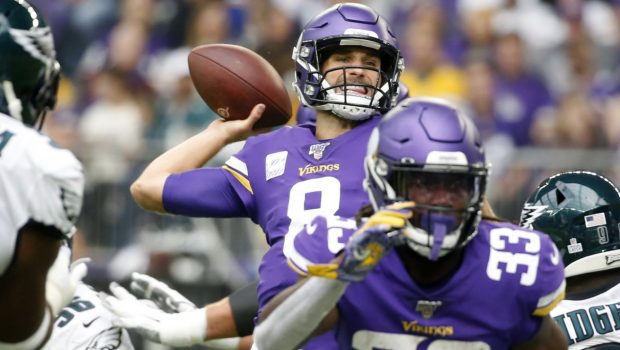 The Eagles book on the Vikings yesterday was:

So much for that book!

The Vikes smacked the Birds 38-20, and Cousins did his best imitation of Tom Brady.

Cousins threw to Stefon Diggs for three of his four touchdowns, racking up a season-high 333 passing yards.

”You never really know how it’s going to come out, because you never know what defense you’re going to get and what adjustments they’re going to make, but as far as like starting fast early, it’s always a big thing because you want to hit the ground running,” said Diggs, who had 167 yards on seven catches.

Diggs scored on first-half passes that covered 51 and 62 yards, becoming the first player since Randy Moss in 2000 to post two touchdown receptions of 50-plus yards in one game for the Vikings (4-2).

”You play the game that’s called,” Cousins said, ”and today it was an aggressive one.”

Diggs’ most important catch came late in the third quarter, a double toe tap in the back of the end zone from 11 yards out that pushed the lead to 11 points after Carson Wentz and the Eagles (3-3) had pulled within 24-20 with 17 straight points.

The Vikings became the first team to hit the 100-yard rushing mark in the last nine games against the Eagles, who also surrendered 300-plus passing yards for the fourth time in six games. The danger presented by Dalvin Cook in the backfield and the success of Cousins at selling fakes created a wealth of play-action completions.

”They run the ball, play action, and throw the ball deep,” Douglas said. ”That’s just what they always do.”

Cousins went 22 for 29 with one sack and one interception that was, oddly enough, Diggs’ fault when a sideline throw hit him in the hands, bounced off his helmet and into the air behind him for former Vikings safety Andrew Sendejo to pick off late in the second quarter.

The sign that this was not the Eagles’ day came right after that, when a fake field goal from the 21 failed with 20 seconds left. The snap to Jake Elliott left the kicker with only one receiver, well-covered tight end Dallas Goedert, and the desperation throw was tipped by Anthony Harris and intercepted by Everson Griffen.

”We had the look we wanted, tried to take advantage of it, get an opportunity to maybe shoot it in the end zone after that,” Eagles coach Doug Pederson said. ”They made a great play.”