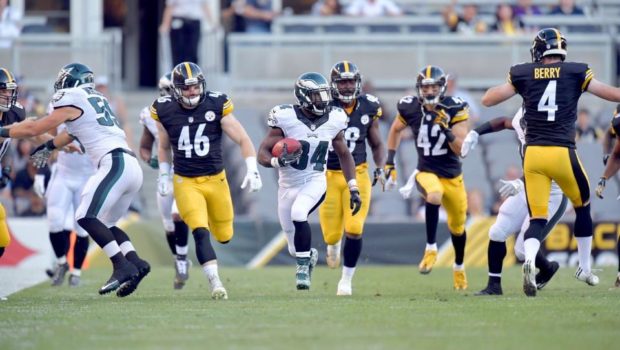 SORRY, EAGLES NATION, OFFENSE IS LOOKING LIKE A HOUSE OF CARDS!

Sure, the defense looks ready for the regular season, especially the secondary.

But what are we to make of the woeful offense?

After piling up 188 yards in Week 1 against the Buccaneers, the Eagles picked up right where they left off last night against the Steelers, generating 45 total yards through the first three drives of the night.

Sam Bradford was under pressure early. Ryan Mathews wasn’t finding any room to run. The Eagles offensive line wasn’t able to hold off the Steelers pass rushers. The first-team wide receivers were missing in action.

The first play of the fourth drive was the most explosive of the game … and it was called back because of offensive pass interference. On the next play, with Philly running the two-minute offense, Nelson Agholor hauled in a nice leaping grab on a potentially interceptable ball from Bradford. He followed it up by immediately dropping a easy opportunity on a crossing route.

The Birds wouldn’t find the end zone on offense until the second half, when backup quarterback Chase Daniel marched them down the field for a touchdown.

The concern for the Eagles is that the offense, which has plenty of big-name talent on it, feels like a house of cards. Bradford and Mathews are both injury-prone. Jordan Matthews, Agholor and Rueben Randle aren’t getting separation often. Lane Johnson, who signed a mammoth contract in the offseason, is likely to miss the first 10 games of the season with a suspension.

Factor all that in and it’s not hard to imagine Bradford being forced to hold the ball and facing plenty of pressure from opposing defensive lines. If the running game can’t get going, look out.