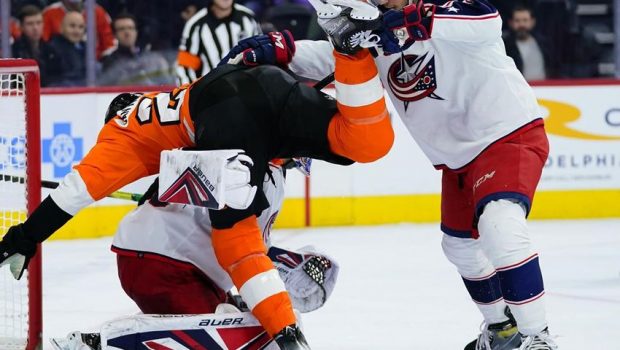 SORRY-ASS FLYERS MAY BE THE WORST TEAM IN THEIR HISTORY!

What can you say about an NHL team that has lost 10 straight games twice in one season?

You could say they are one of the worst teams in the league.

Which the Flyers are, and it didn’t take last night’s home loss to Columbus to qualify.

But this motley crew may be one of the worst teams in the glorious history (though not lately) of the team started in 1967!

Maybe worse than 2006-07 when they actually did have the worst record in the NHL.

They became the first team to lose 10 in a row in more than a decade, losing 2-1 to the Columbus Blue Jackets.

The Flyers also lost 10 straight games from Nov. 18 to Dec. 18; the first skid cost coach Alain Vigneault his job after the first eight games in the skid. Interim coach Mike Yeo lost the final two games and, of course, all 10 in this streak that started Dec. 30 at San Jose.

“We can try to beat them down and get mad at them. I think when you’re doing that, you’re trying to motivate them. I don’t think motivation is an issue,” Yeo said. “We’re being challenged. We have to rise up to the challenge and find a way to be better and we have to find a way to overcome it.”

The only thing plummeting faster than the Flyers in the standings is in the interest in Philly. Once packed almost every game, there were empty rows, and plenty of sections, in front of a dreary, quiet crowd inside the Wells Fargo Center.

“Everyone has us written off. The only guys that are going to get out of it is the guys in the locker room,” Flyers forward Cam Atkinson said. “We have to stick together and hold each other accountable. It’s going to be the guys in the room that dig ourselves out of this mess.”

Columbus snapped a scoreless tie in the second period when Flyers defenseman Ivan Provorov’s clearing pass was poked away by Sean Kuraly. Boone Jenner slid the puck between two defenders and hit Bjorkstrand for the backhander and his 12th goal of the season.

“To get going in the right direction, it’s not pretty sometimes. I’m not sure it was the prettiest one for us,” Kuraly said. “You’re happy about it for a couple of minutes, and then we’ve got another one tomorrow night against Pittsburgh.”

Laine fired one from the circle in the third and went top shelf — where inconsolable Flyers fans were reaching after this one — early in the third for his sixth goal.

The Flyers seemed to catch a break — and a reversal of fortune — early in the second period when goalie Carter Hart lost his stick and was out of place just long enough to leave an empty net. Travis Sanheim cleared the puck to save one goal. The Blue Jackets stuck with it and quickly appeared to score their first goal. But the Flyers challenged the call and goalie interference by Columbus center Alexandre Texier wiped out the lead.

That was the last time there was a rise out of the crowd until the third when Gerry Mayhew scored his first of the season to make it 2-1 for the Flyers.

“They’ve lost a bunch in a row, they’re trying to get a win and we’re on the road. It’s not an easy league,” Columbus coach Brad Larsen said. “We got a little jittery there at the end. You saw it.”