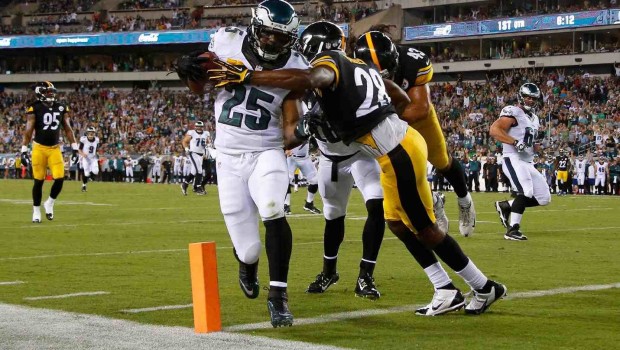 'IT'S SORE, MAN, BUT I'LL BE ALL RIGHT,' EAGLES MCCOY SAYS

But why is it that LeSean McCoy, the Eagles’ workhorse ball carrier and maybe the best running back in the NFL keeps getting these niggling injuries?

And what does it mean for the Eagles chances once the 2014 regular season begins in 16 days against the Jacksonville Jaguars at the Linc?

X-rays on McCoy’s thumb came back negative Thursday night but he could still feel the effect.

McCoy, the NFL’s reigning rushing champion, exited in the first quarter after suffering the injury. He had already scored a 22-yard touchdown and totaled 50 yards. He came back from the locker room and just watched the rest of the game with his teammates.

After the game, coach Chip Kelly offered very little in the form of updated information.

“The update is he hurt his thumb and he was out,” Kelly said. “So I haven’t talked to him since then. I was talking to him on the sideline and he seemed to be in good spirits, so I don’t think it’s a big deal.”

Don’t expect to see McCoy before the Sept. 7 season opener. Starters, especially ones of McCoy’s caliber, don’t usually play in the preseason finale. McCoy will likely sit next Thursday against the Jets.

McCoy, meanwhile, could use the rest after a tough week. He had missed Sunday’s practice — his first of camp — and said his toe had flared up last week in joint practices with New England. He even mentioned not playing or practicing if the pain became too unbearable.

He didn’t seem bothered by the toe in his short duty against the Steelers. McCoy totaled 50 yards on six touches, including a 22-yard score on a well-executed screen. He ran four times for 24 yards, showing his trademark elusiveness on a 15-yard run that first looked like it wouldn’t gain positive yards.