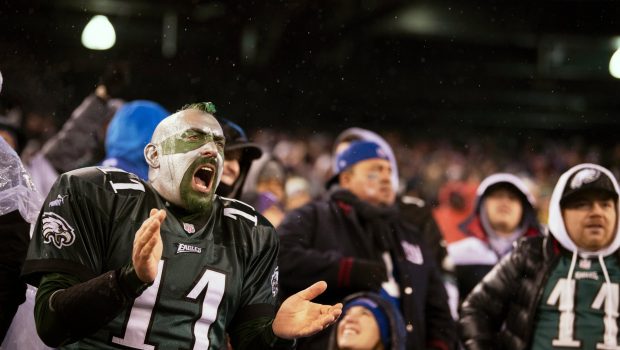 HERE’S SOME HOPE FOR EAGLES FANS GOING TO THE LINC THIS FALL!

So, do Eagles fans have any hope of seeing their faves in person this fall?

One NFL owner thinks so.

Carolina Panthers owner David Tepper believes there should be enough coronavirus tests by the fall that the NFL could play games in stadiums with some fans.

“You won’t be playing having full stadiums, but that doesn’t mean you can’t have some fans in the stadium either,” Tepper told CNBC today. “If you’re comfortable being in a closed airplane for a cross-country trip, 18 inches apart, maybe with two seats in between you and being five feet away from each other, you might be comfortable in an open-air stadium.”

The Panthers are one of 20 NFL teams with open-air stadiums. Five more have retractable roofs.

While the NFL hasn’t officially said when players and team personnel can return to their facilities for offseason workouts, the league did release the 2020 schedule last week with games beginning the second week in September.

The NFL is looking at all contingency plans in case the pandemic worsens. One of those reportedly includes delaying the start of the season, possibly until October. Empty stadiums reportedly also have been discussed.

Tepper said he believes there should be enough tests by the fall to make sure players are “safe on the field.” He noted that some European soccer leagues have announced intentions to resume play this spring and it would be “practical” to devise a plan for some NFL fans to attend games.

He mentioned the possibility of fans having to wear face coverings and practicing other social distancing rules inside the facility to help create a safe environment.

“There should be some amount of fans in the stadiums, depending on what locale and where you are and what the local rules are,” Tepper said.