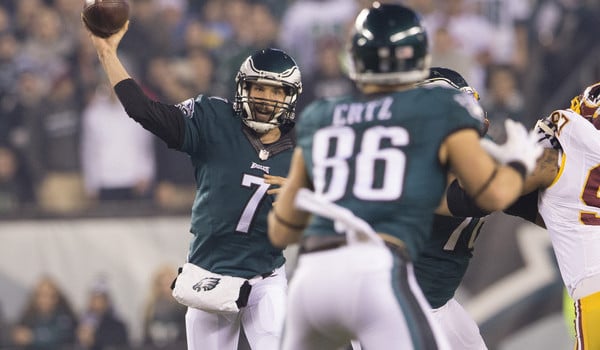 SO, WHERE ARE THE FOLES-FOR-BRADFORD EAGLES CRITICS NOW?

So, where are all the whiners in the Philly lame-ass media who pitched a fit in March 2015 when the Eagles traded quarterback Nick Foles for Sam Bradford (above)?

Probably typing away in their basements while eating Cheetos!

Bradford is clearly the Eagles No. 1 QB after a solid last seven games in 2015.

He is the third-stringer for the Rams and sitting out OTA’s!

After the Eagles followed the Rams with a leap up the board via a draft pick exchange, Philly identified its quarterback of the future: North Dakota State product Carson Wentz.

That didn’t sit well with Bradford who had signed a two-year, $36 million extension with the Eagles (with $22 million guaranteed!). So Bradford and his agent requested a trade and vowed he wouldn’t participate in team activities any longer.

Bradford got some straight talk from Joe Theismann:

“The impression that I get is that this guy here doesn’t want to compete. He’s not interested in playing quarterback. He’s not interested in competing at the quarterback position. He wants it handed to him on a silver platter. Well that’s not the way life is. The Eagles owed him no explanation. If you think you’re that good, you should be able to beat out a rookie who has no earthly idea of what the NFL looks like.

Now the same applies to Foles. Bradford has since made an about face and returned to the team after realizing he didn’t really have any other option.