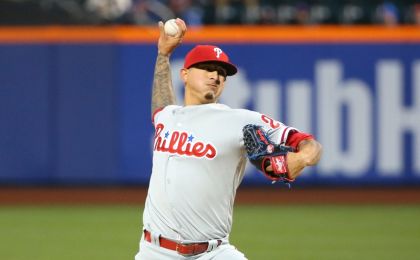 SO, WHAT’S THE MATTER WITH FORMER PHILLIES’ ACE VINNY VELASQUEZ?

What the matter with Vincent Velasquez?

The Phillies had a 6-0 lead over the Brewers through four innings last night at Citizens Bank Park.

Velasquez had struck out six. The Phillies had been hoping the right-hander would come out of his recent doldrums, and it looked like it might be happening.

Once again, Velasquez was throwing a lot of pitches. It turned out his concerns were warranted. Velasquez faced five batters in the fifth, retired only one and was taken out before he was eligible to earn the win.

“Through four innings he might have been dominant, but he didn’t really show command of his stuff,” Mackanin explained. “Everything was iffy. He threw quite a few pitches. Certainly if you’re going to continue to do that into the fifth inning, obviously you don’t have good stuff. Which means I can’t count on you to make the pitch you need to make. You’re just as likely to make a mistake as a good pitch.”

When the manager came to the mound to bring Andrew Bailey into the game, Velasquez allowed his frustration to show, thrusting the ball at him instead of handing it over. “I didn’t like the way he gave me the ball, and we talked afterwards and we’re cool. It’s not an issue,” Mackanin said.

Said Velasquez, the key to the deal that sent closer Ken Giles to the Astros this offseason: “Who wants to be taken out of the game? But I have to hand the ball over, because I can’t do anything about it.”

In his second Phillies start, Velasquez struck out 16 Padres in a three-hit shutout. He hasn’t gone more than six innings since, and his last three turns haven’t completed five innings.

“When he pitched that game against San Diego, I think he kind of thought he had it figured out. And why wouldn’t you feel that way?” Mackanin said. “And then he got hit around a little bit, and all of a sudden, the wheels start spinning and you start thinking, ‘Well, maybe I shouldn’t do that. I’ll try throwing more breaking stuff.’ You get caught in the middle like that.”

“I really don’t know. I can’t give you a legit answer, because I don’t know what’s going on right now,” said Velasquez. “I’ve got to figure something out. It’s just one of those stages where you’re dealing with adversity. You’ve got to fight through it.

“I’m sure it’s both mental and physical. I’ll talk to [pitching coach Bob McClure] and see what we can do about this slump, because it’s getting the best of me right now. I don’t know what’s going on. It’s hitting me pretty hard.”

Catcher Cameron Rupp expressed confidence that Velasquez will figure it out. “He’s throwing a lot of pitches that are fouled off, so that forces his pitch count up,” he said. “He’s going to work on a couple things, and there’s no doubt in my mind he can get back to where he was at the beginning of the year.”

PHILS CATCH A BREAK: HARPER MAY MISS ONLY 6 WEEKS AFTER SURGERY!