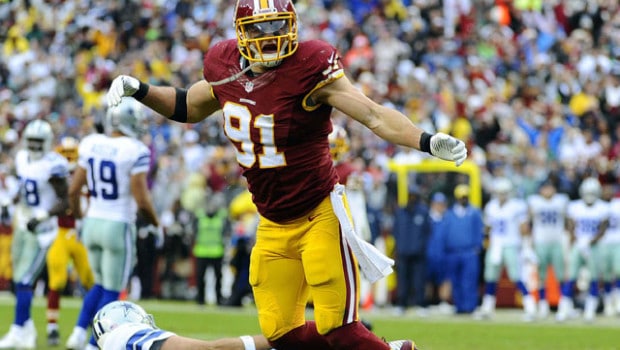 PLAYING WITH GRAHAM AND BARNETT WAS KERRIGAN TIPPING POINT!

It was expected that WFT would move on from 32-year-old Ryan Kerrigan this offseason with the emergence of Montez Sweat and Chase Young, but they were surprised that he wanted to take his talents to a franchise that shares a division with Washington. After his decision was announced, Kerrigan told ESPN’s John Keim that his decision came down to playing time.

“They’ve got Brandon Graham and Derek Barnett, guys who are entrenched and are bona fide studs in this league,” Kerrigan said. “But I know they rotate their guys a lot. Whether I’m a starter or a reserve, I still imagine I’ll get a lot of playing time. That was a big thing for me.”

From 2014-18, Kerrigan recorded at least 9.5 sacks each year and made three Pro Bowls. He’s coming off of his least productive season, however, as he recorded just 17 combined tackles and 5.5 sacks in 16 games played with just one start. While Kerrigan has proven to be a consistent presence on the edge, there wasn’t a single coach that was going to keep the young tandem of Sweat and Young on the sideline. It would be easy to look at Kerrigan’s decision to sign with the Eagles and deduce that he wanted to play against Washington twice a year to remind them who they let go of, but the former No. 16 overall pick in the 2011 NFL Draft said that revenge factor did not play into his decision.

“No, not at all,” Kerrigan said. “I’m not like, ‘Oh, I’ve got to get revenge.’ Get revenge on Washington? The place has been so good to me. No, that wasn’t a thought at all.”

Kerrigan may not be a “starter” in Philly, but he should get plenty of chances to rush the passer. He is set to turn 33 in August, but Kerrigan has proven to still be a playmaker when given the chance.