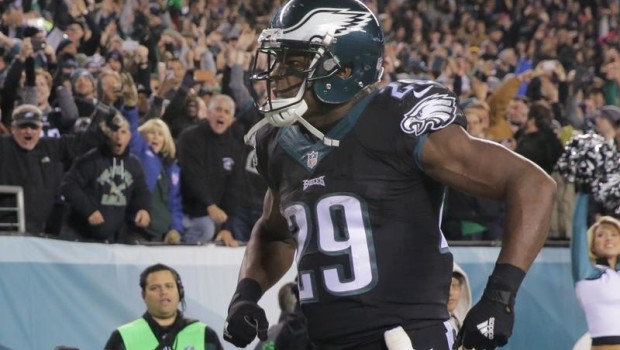 SO, EAGLES FANS: WHERE ARE THE DEMARCO MURRAY HATERS NOW?

After a frustrating beginning of the season, Murray appears to have turned the corner.

Murray recorded his first 100-yard game of the season on last night, compiling 109 yards and a touchdown in the Eagles’ 27-7 win over the New York Giants.

Better yet, the Birds finally looked comfortable utilizing him in their offense.

“The one thing about DeMarco is he’s a downhill, physical runner,” Eagles coach Chip Kelly told reporters. “If we can get him started and get him to the second level he can run through a lot of arm tackles.

“Obviously it was really good to see him get going tonight.”

Murray was expected to shift the balance of power in the NFC East when he spurned the Dallas Cowboys after four seasons and decided to join the Eagles.

After a league-leading 1,845 yards last season Murray has had to build from the bottom with the Birds as he gets used to his new system.

“I’m not (getting enough touches). I don’t think I am,” Murray said following that defeat. “I don’t need to go to any one (of the coaches). It is what it is.”

Since that loss, Murray has carried the ball at least 20 times in the Eagles’ last two games and scored in each.

The Eagles have won both games.

Murray is still a long way from last season’ pace when he scored 13 times, but there now appears to be light at the end of the tunnel for the 27-year-old.

“Coming in from Dallas there’s obviously a lot of difference. But I think I’ve been able to adjust well,” Murray told the New York Post last week.

“You just go out there and work as hard as you can and try to make as many plays as you can when your number is called.”