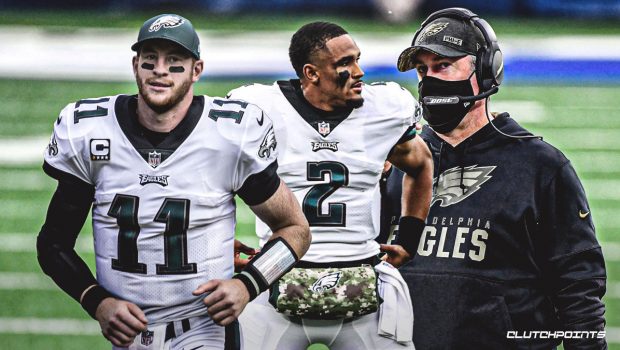 SO, DOUG: HURTS OR WENTZ TO START NEXT WEEK? ‘I’M NOT THERE YET’!

“I’m going to look at a lot of things,” Doug Pederson said when asked what goes into the QB decision this week. “Where we are as a team. Just go back and evaluate the position and when I make my mind up I’ll know, but I’m not there yet.”

Eagles Doug Pederson was asked just now on 94WIP about a report questioning Pederson’s future with the Eagles and rumors that he wants to leave the organization after the season is over.

“Angelo that is the furthest thing—it’s laughable, quite honestly,” Pederson said. “Are we where we want to be? No, not at all. We all have to coach better, I have to coach better, we have to play better, I understand that. We have to figure out a way in this last month of the season to win a football game. We’ve got another opportunity, another great opponent coming in here this weekend.

“I just felt like we needed a spark, as I said after the game,” Pederson said of his decision to replace Wentz with Hurts. “We just needed something positive to go right in the game and so I put Jalen in.

“Obviously we were able to do some things [with Hurts]. He was able to use his legs and do some things. If it sparked us that way, then possibly yeah. I do believe it gave us a little juice.”

Pederson says he hasn’t decided yet which QB will start this week against the Saints.