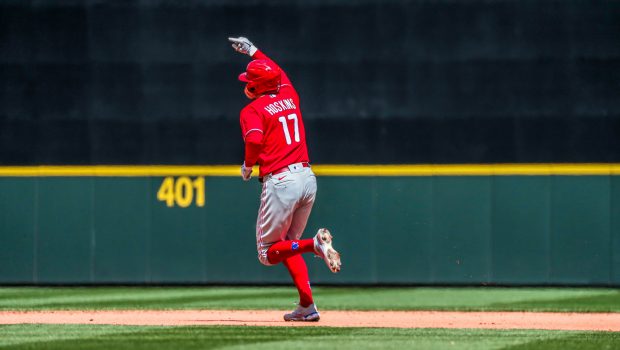 SO, DOES THIS MEAN RHYS HOSKINS’ MONUMENTAL SLUMP IS OVER?

Rhys Hoskins homered for the third straight game and provided all of Philadelphia’s offense with the second grand slam of his career and the Phillies beat the Seattle Mariners 4-2.

The Phillies took two of three from the Mariners helped by the homer barrage by Hoskins. He had solo homers in each of the first two games and provided the big blow with his first grand slam since March 28, 2019, against Atlanta.

“It’s not often you get a couple of days to either rest and kind of regain some energy, or work,” Hoskins said. “It’s hard to take more swings than normal during the year because you’ve got to go play.”

The rainouts last week against the New York Mets allowed Hoskins time to work with hitting coach Kevin Long. They were lengthy sessions with the focus on Hoskins using more of his lower half.

Hoskins lined a 2-1 pitch from Seattle starter Logan Gilbert (4-1) just inside the foul pole down the left field line with one out in the fourth inning. Gilbert, who started the day second in the AL in ERA at 1.36, retired nine of the first 10 batters including five strikeouts to start the game.

If you're gonna hit the ball, make it grand Rhys pic.twitter.com/GINDyLAdsA