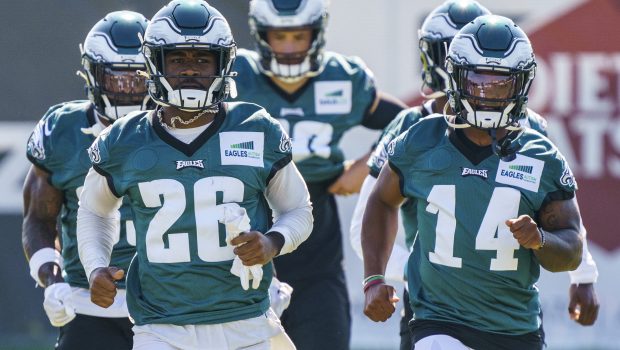 CAN GAINWELL TAKE SANDERS SPOT AS EAGLES NO. 1 RUNNING BACK?

One of the under-the-radar stories in Eagles camp is the running back competition between Miles Sanders and Kenny Gainwell.

Sanders had a mediocre 2021, and he is on notice that his starting spot is at risk.

And Gainwell, the 23-year-old second-year pro who stands only 5-9, but he is a solid 200 pounds and, is excelling at NovaCare, especially at picking up bltzes.

“Coming from Memphis, where it was just zone pickups and things like that where we didn’t have to have a whole lot of man protection up front of the line, and knowing protections, I’ve come a long way from that.

“Just working with coach Singleton each every day and learning my points, knowing everything I had to do to take it to the next level to pick up those blocks.”

“Practice makes perfect,” Gainwell said. “Handle it on the practice field and take it over to the game field.”

Coach Nick Sirianni has made it clear that Sanders will be the main-event runner, but Gainwell is the best receiving back on the team. His 33 catches last year are fifth-most ever by an Eagles rookie running back. But he also averaged 4.3 yards per carry, ninth-highest in Eagles history by a rookie running back and fifth-highest among all NFL rookies last year.

“Feel great going into Year 2,” Gainwell said. “I feel comfortable with each and every spot on the field, so I’m taking advantage of my opportunities and whatever comes to me, I’m going to take advantage of it and go.

“Be myself, continue to work hard and everything else is just going to fall in line.”