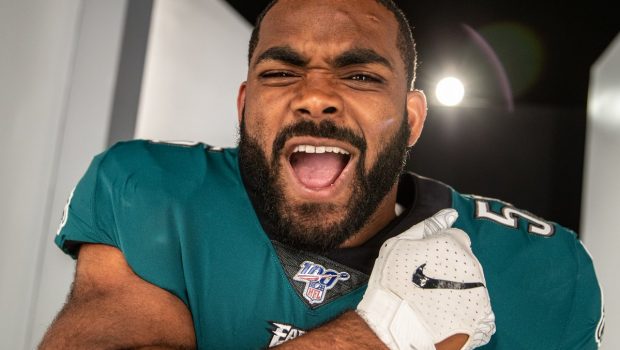 SO, BRANDON GRAHAM, WHERE WERE YOU AND THE EAGLES PASS RUSH?!

For the first time this season, the Eagles finished a game without any sacks.

“We’re not getting to the quarterback — especially me,” said Fletcher Cox, the centerpiece of the Eagles defense. “We know that teams are trying to slow down our pass rush, but we have to get more aggressive up front and get after the quarterback.”

The Eagles now have two sacks on 119 quarterback dropbacks this season. The two sacks have come from Tim Jernigan and Andrew Sendejo. Cox, Brandon Graham and Derek Barnett must get home as pass-rushers. To go this long without those starters recording a sack is problematic. The Eagles had eight sacks after Week 3 last season. They now have a sack on 1.8 percent of dropbacks this season. They finished last season at 6.58 percent.

Want an example? On a third-and-11 in the fourth quarter, Graham pressured Lions quarterback Matthew Stafford around the edge. It was an effective pass rush that forced Stafford to make a throw. Stafford hit Danny Amendola for a 15-yard gain. The chains moved. If it’s a sack, the Lions must punt. That distinction cannot be overstated. And it’s what the Eagles are missing.

“I know how the sacks go,” Graham said. “Right now, we just let people say what they’re going to say. … It’s a long season and you never know how stuff ends.”

Cox said he didn’t know the Lions were going to max protect as much as they did, but he assumed they saw what worked for the Falcons last week. It’s also notable how much defensive coordinator Jim Schwartz is blitzing. He’s known to rely on a four-man rush. The fact that he’s sending extra pressure (and it’s still not working) could speak to the current state of the defensive line.

The Eagles entered the season expecting Malik Jackson to be a big part of the pass rush. His absence is a factor. But their depth has been critical in recent seasons, especially on third downs. Chris Long’s pass-rushing success was an example.

An effective pass rush is not all about the defensive line. The secondary must contribute with tight coverage. There were too many times Sunday in which Stafford threw into open spaces instead of tight windows. But spend enough time around this defense, and you’ll hear that it starts with the defensive line. They’re not dropping the quarterback, and it’s become a problem.

“Jim (Schwartz) always says we’re the engine that runs it,” Barnett said. “He puts that onus on us, and we’ve got to step up to the challenge.”