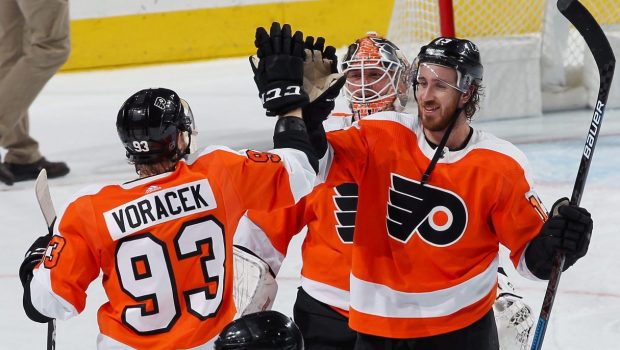 SO, ARE THE FLYERS A CONTENDER OR JUST ANOTHER PRETENDER?

I’m as confused as most of you are about the Flyers.

I want to give them a chance to win my heart.

But the last few seasons — in fact every season since they fluked into the Stanley Cup Finals in 2010 — has given me heartburn.

They start off winning their first two games of this season, go on the road and look terrible and then beat the Golden Knights the other night.

So, which are they?

Real or a phony?

Pro Hockey Talk has a splainer:

New coaching staff, new players, big trades, a big free agent signing, and everything else the team’s ownership was looking for when it wanted a “bias for action” in its new GM.

Even with all of the changes the Flyers remained a gigantic mystery because it wasn’t entirely clear if they were actually any better than before all of the movement started.

If anything, it seemed like a perfect representation of everything the Flyers have come to represent over the past decade where they have enough high-end players on the roster to make you want to buy into them, but just enough questions to give you pause in doing so because there were so many “ifs” attached to their success.

If Ivan Provorov and Shayne Gostisbehere can rebound and take big steps forward as top-pairing defenders.

If Carter Hart can be a star in goal.

If Kevin Hayes is actually worth $7 million per year.

If Matt Niskanen and Justin Braun still have something left in the tank.

Usually the more “ifs” you throw at a team the worse it tends to turn out for them because pro sports is rarely kind enough for every “if” to work out in a team’s favor. Through the first seven games of the season there still isn’t much clarity on what the Flyers are.

On Monday night they snapped a four-game losing streak with what was perhaps their best all-around performance of the season, completely demolishing one of the league’s best teams — the Vegas Golden Knights — in a 5-2 win to bring their record to 3-3-1, the type of record you might expect from the type of mediocre team you expect the Flyers to be.

Still, there are some early signs that maybe this team has played better than its early record might indicate and that there could be some hope here.