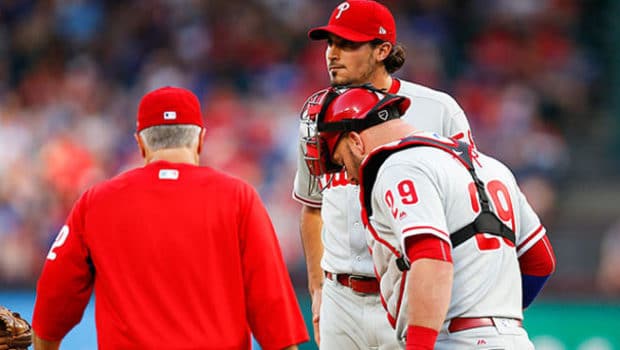 Andrew Cashner pitched seven solid innings and the Texas Rangers matched the longest winning streak in the majors this year at eight games with a 9-3 victory over the Phillies.

The right-hander got his first win with the Rangers, who scored all nine runs in the first five innings after getting just six in the first six starts by Cashner (1-3) when the stocky 30-year-old was in the game.

Delino DeShields matched a career high with four hits, all singles that included two bunts and another infield hit.

Shin-Soo Choo had three hits with three RBI among a season-high 17 hits for the Rangers, who matched the Yankees for the longest winning streak this season and are on their best run since August 2013. The defending AL West champs (21-20) are over .500 for the first time this year.

Zach Eflin (0-1) allowed 11 hits and seven runs in four innings as the Phillies dropped to 3-11 in May. The right-hander hit Joey Gallo with a pitch in the third to become the first Phillies pitcher since at least 1913 to hit a batter in five straight games.

Michael Saunders ended Cashner’s shutout bid in the seventh with his fourth homer of the season, a two-run shot.

The Rangers scored their first three runs on sacrifice flies and the fourth on a wild pitch before Choo’s two-run single made it 6-0 in the third.