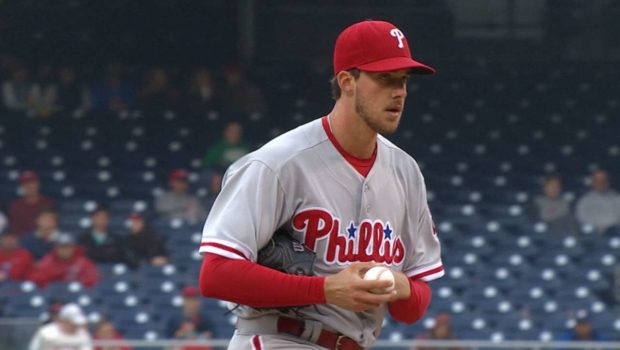 SMOKE AND MIRRORS: WHY HAS PHILLIES’ NOLA FALLEN OFF THE CLIFF?

Nothing has been more emblematic of the Phillies’ slide into oblivion than Aaron Nola’s failures.

Nola has had three clunkers in a row, including last night’s 14-10 loss to the Twins at Target Field. He allowed eight runs in just three innings against the Twins to give him a 15.83 ERA in his last three starts.

Nola has allowed 22 hits, 17 earned runs, seven walks and has struck out 10 in just 9 2/3 innings in that stretch. He is the first Phillies starter to pitch four or fewer innings and allow four or more runs in three consecutive starts since Gavin Floyd in April 2005. Les Sweetland had four consecutive starts like that in June 1930, which is a team record, according to Baseball-Reference.com.

“It must be mechanical,” Nola said. “I must be rushing. I do feel myself rushing a little bit to the plate in the stretch and windup. It’s just something I will try to tweak for the next start. I’m probably just trying to do too much with a pitch.

“I haven’t really had a smooth first inning for a little while,” Nola said.

Nola avoided damage in the second inning, but walked Byron Buxton and Grossman.

Freddy Galvis made a couple defensive miscues to contribute to a four-run third inning. Odubel Herrera had a ball tip off his glove for a double to allow two runs to score. But clearly Nola has not been the same pitcher he had been most of his young career.

Nola has walked seven batters in his last 9 2/3 innings. He walked just 15 in 78 innings in his first 12 starts. His 1.73 walks-per-nine-innings average from Opening Day through June 10 ranked 10th among 109 pitchers with 50 or more innings pitched.

“I was just bragging about him before the game to [Twins broadcaster and Hall of Famer] Bert Blyleven, how his strength is his ability to locate pitches,” manager Pete Mackanin said. “I looked at the first couple of innings on the monitor — I came in between innings — I don’t think he hit the mitt more than a couple of times. He was all over the place. He’ll get that back. But something is missing right now.”