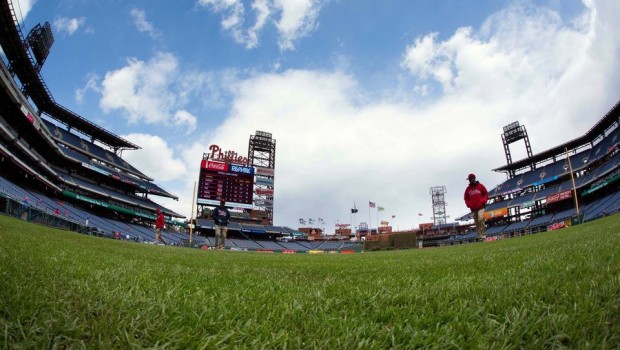 The sky was pristine in the morning, but by game time the sun was gone and so was Phillies’ offense.

What if they played a game and nobody watched?

The Phillies announced a crowd of 17,097, the smallest in Citizens Bank Park history, for their 9-1 loss to the Miami Marlins. It was their smallest crowd in Philadelphia since June 4, 2003, when they drew 16,232 in a game against Seattle at Veterans Stadium.

The Marlins came to Citizens Bank Park Tuesday with manager Mike Redmond about to lose his job.

They finished it Thursday with a 9-1 victory to win the series and end a 10-game road trip with a little momentum on their side.

The Marlins took advantage of three walks and one hit batsman in the fourth inning, when they scored four runs on two-run singles by Adeiny Hechavarriaand Martin Prado. Hechavarria went 4-for-4 with three RBIs, while Prado went 3-for-5 with four RBIs. Miami scored four again in the sixth, two on Giancarlo Stanton’s line-drive homer.

“Today was a great day, and now we need to focus on tomorrow,” Redmond said. “We got some big hits and took advantage of situations. Lot of good at-bats and it’s nice to win a series.”

The Phillies continued to struggle offensively, scoring a run in the ninth inning to avoid their third shutout. The Phils have scored the fewest runs (41) in baseball, while leading baseball in errors (17) and walks (66).

“We’ve got some work to do,” Phillies manager Ryne Sandberg said. “We have to tighten up the defense. We have to play a little bit smarter. Tighten up the fundamentals. We have to find a way to get some runs up there.”

Phillies right-hander Dustin McGowan threw three scoreless innings before walking the bases loaded with one out in the fourth. McGowan then allowed a single to Hechavarria to score two runs and hand the Marlins a 2-0 lead. At that point, Sandberg replaced McGowan with Hector Neris, who hit Marlins pitcher David Phelps with a pitch to reload the bases, setting up Prado’s hit two batters later.

Prado had two of the biggest at-bats in the win. In the fourth, Prado, who moved into the second spot in the batting order at the start of the series, worked an eight-pitch at-bat off Neris before hitting a two-run single through the left side for a 4-0 lead. In the sixth, his one-out double brought two more runs home as the Marlins built a six-run lead.

The Phillies entered the game having scored the fewest runs in baseball, and those struggles continued against a pitcher making his second start of the season as well as a struggling bullpen. The Phillies also committed two errors and walked five to add to their league-high totals.

With a bullpen that entered the day with a 4.96 ERA — 28th in the majors — the Marlins needed effective innings from Phelps. The righty worked seven shutout innings in which he struck out five and cut his ERA by more than half down to 3.55.Sandberg sat Carlos Ruiz, Ryan Howard and Chase Utley, the only three remaining position players from the championship team. The Phillies played a game Sept. 18, 2014, with pitcher Kyle Kendrick in the lineup. Kendrick pitched for the Phillies in 2008, but he did not make the World Series roster.