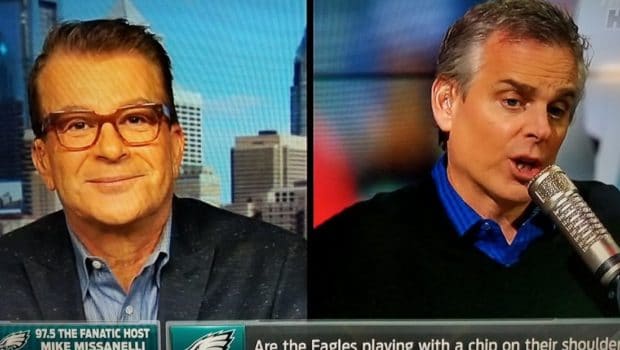 Cowherd’s remarks are in bold italics:

In the East coast, New York’s got the money. Boston’s got the titles. DC’s got the power. And Philadelphia’s got a cheesesteak. And you guys have a chip on your shoulder, and it’s part of why we love you. But Philadelphia’s always angry at everybody.

Well, let me first get to this, OK? Because you know, I am not a homer. I think you know that. We’ve known each other for a while now. You can’t imagine how much glee I feel right now representing Philly, going up against the evil empire of Philadelphia, which is Colin Cowherd. There’s some unfinished business.

Before we get into all the little nuances here this game, there are some unfinished business. You called Philadelphia fans the dumbest sports fans in America.

And for the life of me, you’re going to have to justify that to me. The Andy Reid argument we have had time and time again, and you still have not learned. And we never wanted to run Jay right out of town. Francona had a team that was terrible for four years. He didn’t really do anything to improve them. It’s not like we wake up and want to run people out of town. They don’t perform. And that’s when the tensions get high and we say it’s time to move on.

But could I not argue that if it wasn’t for Andy Reid, that Nick Foles wouldn’t be an Eagle, that you should put your arms around him? He wanted to retire, and then he’s like, time out. Kid, you got some talent here. And Nick Foles is like, I was going to quit football. Couldn’t you at least put your arm around Andy Reid and go, you know what? Thank you for the gift of Nick Foles.

Your fascination with Andy Reid is beyond my comprehension. I mean, he was here for 14 years. And he has proven in Kansas City that he can’t win, either.

Now, we put up with 14 years of good success, but not the ultimate prize. He has coached 19 years without winning a championship. What are we missing here with Andy Reid? And what is your infatuation with the guy.

You didn’t win the Super Bowl, but you were very– again, Charles Barkley and Marino didn’t win titles. You were very good under Andy. You were the force to be reckoned with in the NFC. That is something.

How many years do you put up with being a force without getting to the next level, where you finally have to cut bait? His last year, he was four in 12 for his regular season. It was time to move on from Andy Reid.

And he has done the same thing in Kansas City. You saw how he coached in the playoffs. He’s an inadequate playoff coach. He was one in four in NFC title games with a better team. So let’s get past Andy Reid. It’s like you have this– I don’t know what it is. But the Eagleshave managed, believe it or not, to move on without the grand poobah of NFL coaching in your mind, Andy Reid.