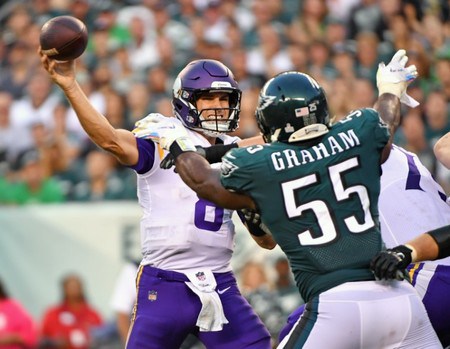 ON A BUDGET? SLING TV HAS EAGLES-VIKES MNF COVERED, AND MORE!

The Eagles squeaked by the Lions last Sunday, and they face the Vikes Monday night at the Linc.

It’s way too soon to say this is a must-win for the Birds, but the NFC East might be a bit tougher than we had at first thought.

Philly is 1-0, and so are the Commanders and Giants.

So, a win Monday night would give them a leg up.

And we recommend Sling TV as the way to watch Monday night.

Every game on ABC is simulcast on ESPN3

DeVonta Smith (who somehow did not have a catch in the Eagles’ 38-35 win over Detroit) and A.J. Brown just might be the best pairing in franchise history.

Brown caught 10 passes for 155 yards, tying his career high, in his Eagles debut on Sunday and quickly has become QB Jalen Hurts’ go-to option on the outside. The Eagles traded the No. 18 overall pick and a third-rounder to the Tennessee Titans on draft day for Brown, who then signed a four-year deal with $57 million guaranteed.

Smith set a club rookie record last season with 916 yards receiving, but went without a catch against the Lions while being targeted just four times. It’s likely Hurts will look to get Smith more involved against Minnesota.

“DeVonta is a premier player in this league, and did I think in a million years he wouldn’t have a catch? Absolutely not,” Eagles offensive coordinator Shane Steichen said. “I did not think it was going to go that way. But that’s my job, I’ve got to get him the ball.”

If Hurts can hit Smith and Brown for big plays, look out. If not, the Vikings just might be laughing again at the Eagles expense.