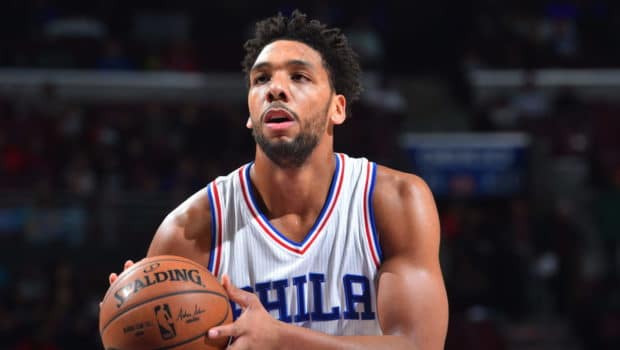 DOES SLIMMER, TRIMMER JAH OKAFOR HAVE A PLACE ON THE SIXERS?

So asks Will Leitch:

Last February, negotiations over an Okafor deal intensified to the point where the 76ers told him to stay home while the team traveled to Charlotte. But the deal fell apart and the next day Okafor boarded an American Airlines flight to rejoin the team in Boston. An uncomfortable situation grew worse.

“It was awkward,” Okafor said. “I’m at home, watching my team play on TV, not a part of that team, but not a part of any other team. I was anxious. Eager to figure out where I was going to be. Kind of excited to have an opportunity to be with a new team and have a fresh start. Sad that I was leaving my teammates that I’d gotten really close with. And then I ended up playing the next night. I can’t really put into words how difficult it was.”

So Okafor remains a Sixer — for now, at least. The 76ers continue to discuss trade options, but they have yet to find a suitable offer, in part because his value has plateaued. Says a rival general manager, “Everybody knows he’s been on the block. The fact that he’s been injury-prone obviously doesn’t help — he’s only played 103 games total in two seasons.”

He also represents an increasingly irrelevant NBA archetype: the back-to-the-basket center. As the NBA hurtles into the pace-and-space era, teams are searching for big men who shoot well enough to spread the floor and move well enough to contain ball screens and protect the rim. That’s not Okafor’s game. Not yet, anyway: